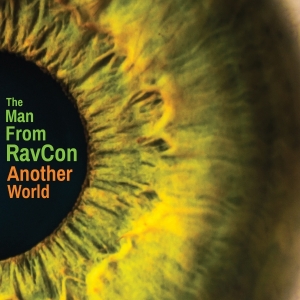 Charlotte, NC – Since 2010, The Man From RavCon (aka, Mike Brown), has been creating adventurous, atmospheric instrumental music featuring Mellotron enriched arrangements accentuated by piano and organ, interweaving synths, bass, dynamic percussion, and melodic guitar. Blending influences of 70’s classic FM album rock (Stones, Kraftwerk, Steely Dan, Supertramp) with a melodic prog flavor, The Man From RavCon’s ninth release, “Another World,” may be considered a somewhat more accessible work than his most recent offerings, but is no less adventurous in scope. With contributions from special guests, guitarist Larry Smith, and flutist Jeff Eacho, “Another World” features a more lighthearted, breezy vibe making it the perfect soundtrack for Summer 2018 and beyond.

Having founded, performed and recorded for over a decade with now defunct Charlotte, NC power-pop outfit, The Ravelers, multi-instrumentalist Brown, has taken full advantage of the freedom of his solo project by pushing his music beyond the expected. While early Man From RavCon releases explored the sounds of spaghetti western, surf/instro rock, blaxploitation and B-Horror Cinema, more recent outings were enhanced by a classic progressive rock influence. As a result, UK publication PROG Magazine proclaimed “Skyscraper” (2013) to be “a straight-up classy affair” and Progression Magazine praised “Strange Universe” (2016) as “an alluring musical time capsule fueled by analog synth timbres, psychedelic prog motifs and spacey rockin’/ambient hues that entrance, charm and certainly keep you guessing what might come next.”

And now much to the excitement of fans worldwide, The Man From RavCon’s eagerly anticipated new album “Another World” will be released on June 22! Brown is clearly enthused about this effort, “This one was a bit of a surprise. It came together so naturally! Of course, it doesn’t hurt to have talented friends like Larry and Jeff, who really helped take the tracks they played on to another level.”

Check out The Man From RavCon’s YouTube channel where, along with videos from all previous albums, you’ll find the brand new video for “Satellite Flight”: https://youtu.be/LkXs-05-Pk0

To purchase The Man From RavCon’s “Another World”: https://store.cdbaby.com/Artist/TheManFromRavCon ;
Also available on most digital platforms

This entry was posted on Thursday, May 10th, 2018 at 20:33 and posted in Press Release, The Man From RavCon. You can follow any responses to this entry through the RSS 2.0 feed.
« IZZ Vocalist Laura Meade to Release Her Debut Full-Length Studio Album Remedium on May 18, 2018
New PledgeMusic Campaign Started For Spirits Burning & Michael Moorcock’s “An Alien Heat” Album »