Sarah Perrotta To Release 4th Album “Blue to Gold” Featuring Members of King Crimson, Peter Gabriel, Gang of Four, The Fixx and Others!

Sarah Perrotta To Release 4th Album “Blue to Gold” Featuring Members of King Crimson, Peter Gabriel, Gang of Four, The Fixx and Others!

In addition to her lush vocals and melodic piano, Sarah utilizes a variety of keyboards and synths including the Mellotron, Rhodes, Wurlitzer, Moog, and even a toy piano. The steady masterful drumming of Jerry Marotta sets the foundation for Sarah Perrotta’s captivating voice and songwriting.

The final result of “Blue to Gold” is an ethereal sound that washes over the listener with swirling waves of dreamlike melodies and harmonies. From start to finish it’s a sonic journey that rewards the listener with a musical depth worthy of repeated listenings.

Sarah explains the meaning behind her new album, “To transform struggle into something of value and beauty. The songs are each like a prayer or meditation for me based on relationships and life experience. Topics include the awe and selflessness of parenthood, transition, embracing our primitive dark side, rising above conflict, not wanting a good thing to end, being open to following dreams, finding unity amid misunderstanding, a tribute to a friend who died suddenly, to live life fully and the cyclical beauty of it all.”

“Blue to Gold” will appeal to listeners of Heather Nova and Happy Rhodes to Sia and Billie Eilish as well as fans of one of rock’s most respected rhythm teams: Tony Levin and Jerry Marotta. 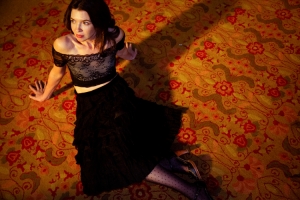 In support of Sarah’s new album release she will be touring the northeast this Winter and Europe in the Spring of 2022. She also has several music videos in the works.

Prog Ensemble Dario and the Clear has released a new album titled “Optic Nerve.” The release features an impressive collaboration of musicians that have worked with Dario on previous recordings and several new musical guests. He was reunited with keyboardists, Jamie Peck and Natt Kerr, as well as his Woodstock friends, Tony Levin (King Crimson, Peter Gabriel) and Jerry Marotta (Orleans, Peter Gabriel & Paul McCartney). Trey Gunn (King Crimson) is on Warr guitar. Music engineer, Eric Dalton, joins Dario for the first time on bass and backing vocals and Robert Kopec on upright and electric bass. Adam Siegel joins on alto sax. “Optic Nerve” is a combination of progressive, ambient and rock.

Says Dario, “The message is to find yourself not just as an artist but a human being. Through all the craziness in the world I had to keep reminding myself that after the Dark Ages came the Renaissance, I really think that will happen. We’ve had so much time to reflect and dig deep into ourselves. For the recording process I was really concentrating on what I call the ‘three I’s.’ Instinct, Intuition and Intent. As a result the creative process was so much freer.

Watch the Video for “This Moment”: https://www.youtube.com/watch?v=_F4pkpJEmcw 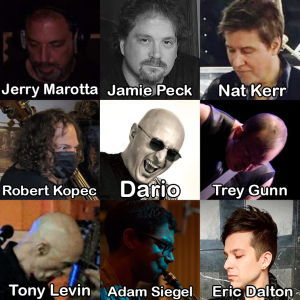 Biography
Dario Saraceno was born in Ripacandida, Italy and moved to London, England during the height of Beatlemania. After his mom took him to see the Beatles at an outdoor concert, he was profoundly influenced and became infatuated with becoming a musician. Fast forward to his teenage years and music became a reality when he purchased his first guitar.

After graduating Berklee College of Music, Dario toured with his band, Decoy and worked as a session guitarist, touring and teaching. His instructional book, “The Shapes Remain the Same” was published in 2010.

After his Decoy project came to a close, Dario went solo, starting a new band he named Dario and the Clear. Dario and the Clear has released five albums since 2011. His recent album “Optic Nerve” was born out of a creative burst during the coronavirus pandemic when there was time for a great deal of self-reflection.

“Fantastical…Cool and iconic voice…and the mood is great. I see it as a thought-provoking and passionate recording.” Joe Battista, Director, The 13th Street Theater