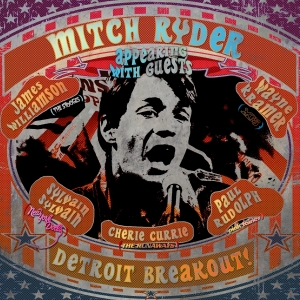 Los Angeles, CA – After wowing audiences with a rollicking Christmas-themed release at the close of 2018, the icon of Detroit rock and soul, Mitch Ryder, returns with this superb collection of all-new recordings – Detroit Breakout! The album celebrates both the music of Detroit as well as the classic, timeless songs of Ryder’s generation. From a smokin’ new version of Ryder’s own blockbuster hit single “Devil With A Blue Dress On” to The Capitols’ “Cool Jerk” to Otis Redding’s “(Sittin’ On) The Dock Of The Bay, Detroit Breakout! has something for every true rock n’ roller including special guest performances by fellow Motor City alumni James Williamson of The Stooges and Wayne Kramer of MC5 as well as blues legends Joe Louis Walker and Arthur Adams PLUS the New York Dolls’ Sylvain Sylvain, The Runaways’ Cherie Currie, daughter of B.B. King, Shirley King and more!

Many of the guests who contributed to the project sang the praises of both Ryder and the project as a whole:

“I love Mitch Ryder and I love ‘Devil With A Blue Dress On.’ Always one of my favorite songs. I had fun playing on the track. The finished version with Mitch sounds really current. Wow…just killer!” – James Williamson (The Stooges)

“I’ve been smitten with Mitch Ryder since I first heard ‘Devil With A Blue Dress On.’ When asked if I’d like to back this legend? Heck! I’ve worked all my life for this!” – Cherie Currie (The Runaways)

“[Mitch Ryder] is among the greatest soul singers of our generation and the opportunity to play guitar on his version of ‘Cool Jerk’ is a distinct honor for me. It’s one of the greatest songs in recording history. Perfect in every way. I count this as a high-point in my career.” – Wayne Kramer (The MC5)

“‘Dirty Water’ is such a garage classic. It’s the kind of music I’d listen to all the time as a kid and played in my earliest bands. Mitch’s vocals kicked ass and I really like how my guitar part turned out. I could play this kind of music all day long.” – Sylvain Sylvain (New York Dolls)

“It’s always a dream come true when you get an opportunity to be part of a project with one of your heroes!! I find myself in that situation, performing with Mitch Ryder.” – Joe Louis Walker

“This has been an incredible experience for me. Mitch Ryder was one of my favorite singers/bands growing up and he greatly influenced my tastes in music His songs were almost Punk before it ever existed. I feel incredibly lucky just to be a small part of his new album and I love it that he’s still doing this stuff to this day. He’s even older than me and still at it. Hope it lasts forever!” – Walter Lure (Johnny Thunders & The Heartbreakers)

“I felt absolutely chuffed to be asked to play on Mitch Ryders’ cover of ‘Have Love Will Travel.’ Upon listening to his awesome vocals, I was truly inspired to get my amp up to Warp 16 and let ‘er rip—so much FUN. Thanks for having me on board, Mitch!” – Paul Rudolph (The Pink Fairies/Hawkwind)

Detroit Breakout! will be available everywhere starting June 14 on CD in a special digipak, on a limited edition RED vinyl pressing, and on digital!

Take A Ride This Christmas With Rock/Soul Legend MITCH RYDER On His First Ever Holiday Album!

Take A Ride This Christmas With Rock/Soul Legend MITCH RYDER On His First Ever Holiday Album!

Los Angeles, CA – Of the many gifts given to the world by the Detroit music scene, from the compositions of Duke Ellington to the raw punk power of The Stooges and current Hall Of Fame nominees The MC5, one of the most enduring has been the unforgettable voice of Mitch Ryder. Whether performing with or without his Detroit Wheels, Ryder has been one of the most dominant figures in the Motor City’s bountiful music scene for the last 4 decades, stuffing the world’s musical stockings with such sweet hits as “Devil With A Blue Dress On,” “Jenny (Take A Ride)” and lots more! This year he proudly presents a collection of brand new recordings to celebrate the spirit and soul of Christmas, called Christmas (Take A Ride), which finds the blue-eyed crooner offering fresh takes on holiday classics made famous by Elvis Presley, Stevie Wonder, and Bruce Springsteen along with seasonal favorites “Let It Snow,” “Rudolph The Red-Nosed Reindeer” and more! Christmas (Take A Ride) will be available on both CD and digital starting October 26 via Goldenlane Records, a division of Cleopatra Records, Inc.