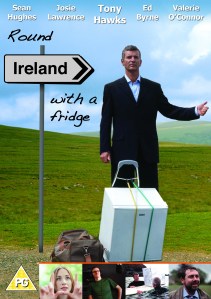 4/21/2012 – London, UK – First it was a bet, then it became an internationally best selling book and now Tony Hawks’ eccentric, hilarious, and life changing hitchhike Round Ireland with a Fridge has become a feature film, the first in a trilogy of feature films (Playing the Moldovans At Tennis and A Piano In The Pyrenees) of books which have collectively sold over a million copies.

As an inspiring and funny British comedy-drama that will evoke memories of Calendar Girls, The Full Monty and Local Hero, the film recreates Tony’s actual 1997 journey around Ireland as he re-evaluated his life and career, found romance, met a wide range of bizarre characters, made many new friends and discovered that people are perfectly prepared to treat a small white domestic appliance as though it was a fully fledged person with a personality in its own right.

During the course of the film the fridge is taken surfing, christened, blessed by nuns, accompanied by a bagpiper, taken to a bachelor festival and becomes the hero of a national radio station as Tony and all those he encountered become aware of the power and philosophy of the fridge !

Round Ireland with a Fridge was aired on BBC 4 in March this year, and topped BBC 4’s Sunday night ratings.

The DVD is available to stream at http://www.roundirelandwithafridge.com from April 16th 2012

” ‘Round Ireland With A Fridge’ is a human, gentle, uproariously funny, touching, poignant, uplifting, and happily spiritual film.” – Stephen Simon, Producer, ‘Somewhere in Time’, ‘What Dreams May Come’, ‘Author’, ‘Bringing Back The Old Hollywood’.

A trailer of the film can be seen on http://www.roundirelandwithafridge.com