AGENTS OF MERCY – THE BLACK FOREST 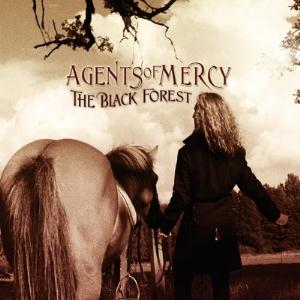 Journey with Agents of Mercy to Dark and Dramatic Places!

Agents of Mercy was formed in 2009 by guitarist Roine Stolt and singer Nad Sylvan. The two core songwriters have cultivated their sound with different musicians over the course of three Agents of Mercy albums.

Their latest, The Black Forest is filled with dark imagery and dramatic instrumentation. The eight tracks follow a rock oriented path yet twist and turn through ethno, folk, jazz, medieval, prog and symphonic stylings. Guitars and drums lead the way but mellotrons and moogs add to the mystery of the music.

The CD opens with the shadowy and surreal title track, which sets the tone for the rest of the tunes that deal with death, dreams, freaks, ghosts and other horrors. However there is a glimmer of hope in “Between Sun & Moon” a song that tells us that we are special and to “take a look at the offspring and the seeds of success you’ve sown.”

There is a lot of tales and terrains in The Black Forest. I found that I enjoyed the material more upon multiple listens as there are a lot of subtle sounds placed in its prog rock path. Of particular note is the eerie and electrifying “Citadel” inspired by the legend of the Blood Queen – a serial killer that lived from 1560-1614, followed by the more encouraging message of “Between Sun & Moon”. The CD closes on a reflective note with the intricate instrumental ” Kingdom of Heaven “. Journey with the Agents of Mercy to dark and dramatic places!