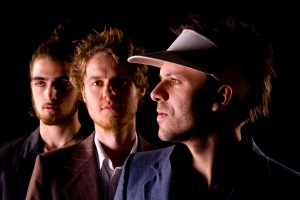 “Now, a band with a different flavour. They’re called Hot Head Show and I absolutely love it.” – Lauren Laverne – BBC

London, UK – Hot Head Show have turned a lot of heads since their debut ‘The Lemon LP’ reached the ears of American bass legend Les Claypool, at whose request they spent much of 2011 touring Europe and the USA with cult superstars Primus. The international fanbase they achieved that year demanded that they return to Europe for two startlingly successful tours as headliners in 2012, leading to their signing with RBL Records in Italy and Noisolution in Germany, in addition to their longstanding relationship with Tentacle Entertainments in the UK and North America.

Since then, they’ve sold out both rock clubs and jazz clubs, having been variously labeled “mind-bending art-pop/avant-jazz/flamenco-punks” (Artrocker), “ironic, surreal alt-folky avant-ska” (Rumore, IT), “A whiplash of melodically tense, undulating avant-funk-rock-blues” (The Rumpus, USA), “Maddening” (Kerrang), “Inherently Sexy” (Notion) and worse. For the band themselves, the genre classification of their sophomore album Perfect is simple – it’s Maximalist Avant-Bang.

Perhaps this is what you’d expect from a band whose singer/guitarist is a former film-editor whose parents are Sonja Kristina of Curved Air and Stewart Copeland of The Police. A band whose drummer held a residency as a composer at the Royal Festival Hall when he was 22, and whose “lead bassist” is the oft-naked, messianic frontman of fellow Tentacle signing Super Best Friends Club.

Recorded in London and New York in sporadic bursts in the midst of 2012’s vigorous touring schedule, ‘Perfect’ captures an important band at the top of its game. Between the poppy purr of tracks like “Bethany”, “Little Kitty” and “Bodie Doesn’t Take It Sitting Down”, the frantic balls-out adventurism of “Bang Now” and “Some Money”, the frankly terrifying “Kansas”, “Bangfish” and “Fingers”, and the psychedelically epic “Hello Doctor” and “Unbearable Lightness of Bang”, ‘Perfect’ somehow manages to feel vividly cohesive despite its atmospheric gymnastics. Joyful and dark, playful and profound but always strikingly melodic, the record touches on elements of Talking Heads, The Birthday Party, Frank Zappa, Deerhoof, Micachu, Screamin’ Jay Hawkins, and every artist who’s tried to totally redefine their medium.

The 10-track album is now available in the UK to download with pre-order through Tentacle Entertainments, with physical release on vinyl and CD on October 14.

Here’s what the press have raved about Hot Head Show…

“Nimble, racing music with moments of Nick Cave passion and Beefheart blues contortion – they offer the complex pleasure of shaking your head in three directions at once.” – Clive Bell, The Wire

“Maddening engaging… Hot Head Show are perfecy for anyone who likes their bands weird and wild.” – Kerrang

“…they come up with some killer tunes on their debut – not many bands show this much promise this early.” – Rockarolla

“I’ve never heard anything quite like this before and I really can’t compare it directly with any one band … Almost beyond description.” – Sonic Abyss