Los Angeles, CA – Following the wildly successful Still Wish You Were Here project released earlier this year, another gathering of classic, prog and art rock superstars have come together to recreate and reimagine Pink Floyd’s ambitious 1977 concept album, Animals! Fusing the white-hot guitar work of Floyd guitarist David Gilmour with the stone-cold cynicism of Roger Water’s lyrics, Animals is widely hailed by die-hard Floyd fans as one of the group’s most highly conceptual and uncompromising albums of their career, and certainly set the template for the commercial breakthrough that would come two years later with 1979’s The Wall.

Now, some of the most veteran players and singers on the planet including jazz-rock guitar legend Al Di Meola, psych-rock godfather Arthur Brown, drum master Billy Cobham, UFO’s Vinnie Moore, Bauhaus’s David J, Dream Theater’s James LaBrie, and so many more come to give their unique spins to this magnum opus. Each track of this groundbreaking work has been completely reimagined with modern production flourishes and tasteful musical additions while staying true to the original album’s heady and subtly complex compositions. Just listen to the new version of “Dogs,” a superb 17-minute suite sung by Rainbow’s Graham Bonnet with Vinnie Moore on guitar, Utopia’s Kasim Sulton on bass, Dream Theater’s Jordan Rudess on keyboards, and King Crimson drummer Pat Mastelotto.

Animals Reimagined – A Tribute To Pink Floyd is set for release on November 19 on both CD and digital with a vinyl version coming in 2022. The CD version comes in a deluxe 6-panel digipak with artwork created by the most successful digital artist working today, Mike “Beeple” Winkelmann, with cover art designed by James McCarthy. Look for the NFT charity auction of the front cover image later this year! 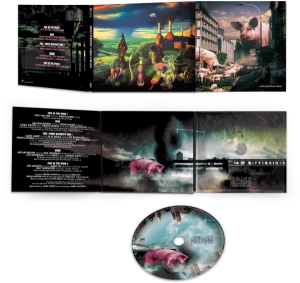 Asheville, NC – Available February 15, 2017 from Rowman & Littlefield Publishing: Bill Kopp’s new book “Reinventing Pink Floyd: From Syd Barrett to the Dark Side of the Moon.” In celebration of the 45th anniversary of The Dark Side of the Moon, Bill Kopp explores ingenuity with which Pink Floyd rebranded themselves following the 1968 departure of Syd Barrett. Not only did the band survive Barrett’s departure, but it went on to release landmark albums that continue to influence generations of musicians and fans.

“Reinventing Pink Floyd” follows the path taken by the remaining band members to establish a musical identity, develop a songwriting style, and create a new template for the manner in which albums are made and even enjoyed by listeners. As veteran music journalist Bill Kopp illustrates, that path was filled with failed experiments, creative blind alleys, one-off musical excursions, abortive collaborations, a general restlessness and—most importantly—a dedicated search for a distinctive musical personality.

“Knowledgeable, well-informed, conscientious, and sensitive. Bill has written about what really matters. Bill’s book is a great read, and well worth the price of admission.”— Jerry Shirley, drummer for Humble Pie

This exciting volume guides readers through the works of 1968 through 1973, highlighting key innovations and musical breakthroughs of lasting influence. Kopp places Pink Floyd into their historical, cultural, and musical contexts while celebrating the test of fire that took the band from the brink of demise to enduring superstardom.

The book draws on archival interviews and reviews as well as many new and exclusive interviews with Peter Jenner, Ron Geesin, Steve Howe, Jerry Shirley, Davy O’List, Willie Wilson, Robyn Hitchcock and many others.

“Combining research into their classic albums and a wealth of little-known and unofficial recordings with astute and entertaining analysis, Kopp generates fresh insight into Pink Floyd’s formative years. Even longtime fans of the band will be surprised and enlightened.”— Richie Unterberger, author of “Unknown Legends of Rock ‘n’ Roll”

Bill Kopp is a lifelong music enthusiast, musician, collector, and music journalist. His writing has been featured in music magazines including Bass Guitar, Record Collector, Prog and Shindig! (all in Great Britain), as well as Billboard, Electronic Musician, Goldmine, Trouser Press, Ugly Things and more than a dozen alternative weekly newspapers. He is the Jazz Desk Editor and Prog Editor at BLURT online, and has written liner note essays for 20 albums, including titles by Julian “Cannonball” Adderley, Larry Coryell, Edgar Winter, Rick Wakeman, The Ventures, Dave Mason and Iron Butterfly. He has interviewed several hundred musicians and music industry figures of note, and his musoscribe.com blog has features thousands of music reviews, essays, interviews and features.

“Reinventing Pink Floyd” will be available February 15 from independent bookstores and Amazon, but pre-ordering direct from the publisher saves 30%.

Author Bill Kopp is available now for interviews, and will be scheduling readings and book store appearances around the publishing date.

London – The British film director and pop promo auteur Peter Whitehead’s kaleidoscopic 1967 documentary is a vivid and controversial snapshot of the height of London’s “Swinging” era.

Featuring interviews with a diverse selection of iconic figures in British and international pop culture – from artists such as David Hockney and Alan Aldridge, through to actors such as Michael Caine and Julie Christie, the author Edna O’Brien, Beat Poet and writer Allen Ginsberg, and Rolling Stones manager and founder of Immediate Records, Andrew Loog Oldham, the movie is rightly regarded as both a celebration and critique of the London “Summer of Love”.

At its heart was a soundtrack album which featured renditions of “Interstellar Overdrive” by The Pink Floyd, “Here Come The Nice” by Small Faces, and contributions from the enigmatic Vashti Bunyan, Brit blue-eyed soulster Chris Farlowe and vocal duo Twice As Much.

Newly remastered from the original master tape, the album brilliantly captures the overheated atmosphere and ferocious pace of the times.

FOR THE FIRST TIME SINCE 1968 THE COMPLETE ORIGINAL ALBUM!

London, UK – Esoteric Antenna is pleased to announce the release of “SIGNAL TO NOISE”, the new studio album by twice Grammy nominated PINK FLOYD engineer ANDY JACKSON. “Signal to Noise” is a fine, modern, progressive work, which draws on Andy Jackson’s exemplary work as an engineer and producer. Besides being an allusion to Andy’s sound engineering background, the title refers to many of the lyrical themes of the album. Andy explains; “The album reflects on the sorting of what is important in life from the humdrum of everyday existence, and is in itself an analogy for the process of the creation of the album”.

Andy Jackson began his career at Utopia Studios in London, training under James Guthrie, a relationship that continues to this day with the duo being co-pilots of Pink Floyd’s sound. Andy had success as a recording engineer at Utopia, including hits with Boomtown Rats “I Don’t Like Mondays”, before the call came from James Guthrie to follow him into the world of Pink Floyd, to work on the film of “The Wall”, an offer he couldn’t resist, having been a Floyd fan for many years. So started a relationship that continues to this day, (on albums such as “The Final Cut”, “A Momentary Lapse of Reason”, “The Division Bell”, “Pulse”, Roger Waters’ “The Pros and Cons of Hitchhiking”, David Gilmour’s “About Face”, “On An Island”, “Live in Gdansk”), resulting in two Grammy nominations for his work and Mix magazine’s award for best live sound engineer for “Pulse” tour. He is also engineer and a co-producer of the soon-to-be-released Pink Floyd album, “The Endless River”.

Along side his work with Pink Floyd and wider work as an engineer, he has recorded three albums, recorded with friends, as a musician in his own right: “On the Surface”, “Obvious” and “Mythical Burrowing Animals”. All three works were ideas ahead of their time it would seem. He did find time along the way to produce work for other artists, including the seminal British Goth band Fields Of The Nephilim. This again was the genesis of a relationship that would lead to the present day, after ex Nephilim Tony Pettitt asked Andy to join his new band The Eden House as guitarist. After three years with Eden House, Andy felt it was time to move on & embark on a new challenge of a completely solo album project. This has lead to the creation of the “Signal to Noise” album, a wonderful sonic experience that is sure to Andy Jackson heralded as a significant creative force in modern Progressive music.

1. The Boy in the Forest
2. One More Push
3. Invisible Colours
4. Spray Paint
5. Herman at the Fountain
6. It All Came Crashing Down
7. Brownian Motion

Check out the new videos: