“Their musicality and stage presence remind me of the glory days of vaudeville. Kim and Connie are kind of like the Bert Lahr and Al Jolson of modern music.” – Victor De Lorenzo, Violent Femmes

“Their music is a blend of my favorite things. Especially cool jazz. They also remind me of beatniks. I’m from Berkeley and I know my beatniks!” – Martha Davis, Motels

“Grauer is a piano player with few equals whose drive and energy spills across the stage and into the audience like nitrous oxide. She’s got a left hand that doesn’t quit, the mark of any great pianist, and a right hand with limitless boundaries.” Zick holds court as a “heart-stopping drummer” whose “grooves get so far out, most people need a map to get back.” Voted Best Contemporary Jazz Group by the Wisconsin Area Music Industry(WAMI) three consecutive years, Grauer and Zick have also received WAMI awards for Best Instrumentalist: keyboards and drums. Grauer has also received awards for Best Female Vocalist and Best Stage Entertainer.

Improvisation is the driving force of MRS. FUN. The duo’s very first gig was all improvisation. Some of the improvisations became songs. 30 years and five recordings later, they wrote the music for TRUTH and held strong to their original mission statement. In every recording, they include one or two cover pieces, usually a Thelonious Monk song. On TRUTH, “Soulful Strut” and “Light My Fire” were selected being a great fit to their original material. All of the instrumental tracks were recorded live. The only overdubs were vocals. 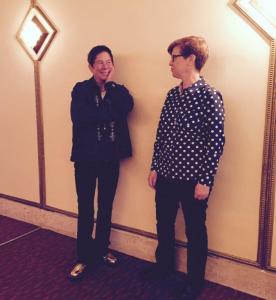 Here’s what the press has said about MRS. FUN:

“MRS. FUN  stomps the jazz terra, doing exactly what Miles Davis had done throughout his whole career: breaking through old boundaries, re-establishing new ones, and then breaking through even those; so that the music can no longer be pigeonholed solely under the label of jazz.” – Shepherd Express

“Multi-keyboardist Connie Grauer and drum basher Kim Zick can play big-beat rock one moment, salute Sun Ra or Thelonious Monk the next, then launch into a groove tune that sounds like a computer getting funky. You gotta respect that.” – Tom Surowicz, Twin City Reader

“Drummer Kim Zick and keyboardist/vocalist Connie Grauer work intuitively from a jazz base, spinning out funky but thorny rhythms and memorable but subtle melodies from disparate threads of rock, pop, tango and the most venturesome explorations of avant-garde ’60s jazz.” – Dave Luhrssen, Shepherd Express

“Connie Grauer is one of the most creative, adventurous and energetic musicians in Milwaukee’s music scene.” – Visions (Milwaukee)

“Zick, propulsively polyrhythmic and invariably on time, is simply one of most talented percussionist on the scene.” – Michael Point, Austin American-Statesman

“MRS. FUN are post-modernist bop, the perfect lounge entertainment for the Cabaret Kerouac…Both Connie Grauer and Kim Zick are impressive players, with not just the ability, but also the agility and vision to take their music into the greenest pastures out in left field. Fun indeed.” – The Austin Chronicle

“Moe Tucker, drummer for the Velvet Underground named MRS.FUN one of her top ten bands in 1994.” – Guardian, San Francisco

“Their quirky output is equal parts chaos and tunefulness. Hanging out in left field where they do, there’s a thin line between pretension and art. Thankfully, they manage to always stay on the right side of the line.” – Creative Loafing (Charlotte)

Up coming gigs & recordings:
MRS. FUN will be headlining Summerfest 2020 on the Klements stage. They will also be performing in several concert series in the Midwest beginning May 2020 along with other jazz performances throughout the Midwest.

In closing the band has this to impart, “Our goal in writing music for MRS. FUN is to continue writing eclectic ear bending pieces for the listener to be engaged in the complexities of each piece. That goal was most definitely achieved on TRUTH.”

To purchase: MRS. FUN/TRUTH is available through Spotify and most digital sites.