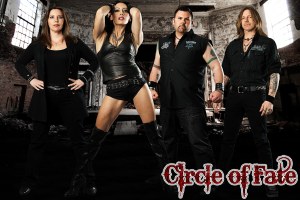 Dec. 10. 2012 – Chicago, IL – Much to the excitement of fans across the globe, Chicago melodic rock outfit Circle Of Fate released their new single “The Other Side Of Me” digitally on December 1, 2012. For the last 15 years Circle of Fate has been captivating audiences all over the world and now with their new single, fans of the band will not be disappointed! Lead vocalist and founding member Michele Caruso says, “The song is a punky song about different sides that a woman has to her. You never know what you are going to get. The songs, as always, are open to interpretation to the listener.”

Circle Of Fate features Michele Caruso on Lead Vocals. Michele has done jingle work for Chicago’s hit radio station B-96, and has also been an extra on a Bud Light commercial. On top of all that, Michele was on the Howard Stern show, singing one of her original songs. The show was also aired on live radio, CBS, and E-Entertainment. She has has performed jingles for Chicago’s rock station Q101 and Mancow’s Morning Madhouse where she sang the Gateway Chevrolet song live on the air. Danny Charatin is feaured on Lead Guitar and Backing Vocals. Danny has been playing the guitar now for about 22 years. Danny’s past bands include Destiny, Moriah, Latent Fury and Ion Vein. Danny has also done some studio work in the past. He has played shows out of state to fill in for other bands and has a blues influence in his playing. He also enjoys playing classical pieces. Danny says, “My ideas and style fit perfect with Michele’s melodies and style. Together it’s the perfect combination for real music that comes from the soul”. Most recently the band acquired two new members; Lynn Parkinson on Drums – Lynn has been in the industry for many years and has played many styles of music. Bassist Jimi Swanson has also been in the music industry for a number of years and has been in many national acts such as Energy Vampires and Odette.

Michele describes Circle of Fate’s music as, “A break from the mundane. Our music has great melodies and it’s in your face rock. Our music tells a story and leaves you wanting more.” Andrew Dodge of Blog Critics touts, “This is quite simply driving metal that is done with lots of feeling and ability. If you are into good metal delivered well, then check this lot out soonest, you will be glad you did!” The band’s 2010 break-out release ‘Back To Life’ captured the attention of the music public at large and the response was no less than astounding. Described as “Pop rock with metal undertones”, Circle of Fate’s ‘Back To Life’ is an amalgamation of catchy melodies and hooky rhythms. Produced by Larry Sturm, who has worked with top music artists such as Destiny’s Child, Mary J. Blige and Disturbed, the CD garnered rave reviews worldwide.

Here’s what the press raved about Circle Of Fate’s ‘Back To Life ‘CD:

“As Circle Of Fate brings on their heavy repertoire, they may be one of the best bands blending classic hard rock sensibility with modern rock trends, and that in itself is quite an accomplishment. Recommended!” – Dangerdog Music Reviews

“Overall, the band is tight, seamlessly transitioning from hard, metallic riffing to melodic choruses and killer instrumental work. In particular, their ability to change tempo within a song keeps the listener anticipating their next move.” – Hard Rock Haven

“Given a few spins, this one grows on you. It’s good tradesmen like performance highlighting Caruso’s vocal and Charatin’s rather tasty guitar playing. Keep an eye on this outfit for sure!” – Glory Daze Music Magazine

“Circle Of Fate will be the biggest band out of Chicago since the Smashing Pumpkins!” – Rocktober Magazine

In recent news, Circle Of Fate has been asked to perform on Chicago’s Late Night TV program ‘Seven On Ridge’. Danny explains, “We recently were asked to play for the ‘press release’ for the show ‘Seven On Ridge’, which is a new late night show in Chicago. We were booked for a slot on the show and they had to change the date due to extra taping they needed to do for producers in China. We will post the date we will be on once it’s announced. The host of the show is Michael Essany and he formerly had his own show on the E network.” You can see more on the show at http://www.sevenridge.com

In the past year Circle of Fate has returned to the studio to record a new album, in which the new single “The Other Side Of Me” will be featured on “The new material we are recording will be our 5th CD for original members Danny and I,” explains Michele “With two new members on this CD we are very excited that this will give COF a fresh ‘edge’ in the music scene while keeping our own unique style. This extra ‘edge’ will keep Circle of Fate in the public eye and our fans wondering, ‘What will this band do next?’ This new CD will cross new thresholds for our band and will take us to the next level.” Adds Danny, “The new CD still contains much of Michele’s catchy melodies and strong lyrics, but the music has reformed to having a different edge to it than in the past. We started off on a lighter note on past CDs such as ‘Shades Of Gray’ and ‘Inner Sanctum’, which were more melodic. ‘Dawn Of A New Era’ was much heavier. The new album being put together contains a couple of strong ballads along with heavier faster paced songs such as ‘Too Much’, ‘What If’ and our new single ‘The Other Side Of Me’. We believe when the album is finished it will be a great listen from beginning to end with a nice flow from song to song, so when the CD is finished playing you are wanting more.” Producer extraordinaire Eric Greedy, who has worked with such music legends as Paul McCartney, George Harrison, Ringo Starr, Elton John, Steven Tyler, Brian Wilson, Rage Against The Machine, Guns & Roses (the list goes on and on), produced two songs on the new CD. Also, formerly from Slash’s Snakepit, Matt Laug played drums on the two tracks. Both cuts wre mastered by industry legend Big Bass Brian, who’s impressive list of clients include the likes of Alice Cooper, Black Eyed Peas, Creedence Clearwater Revival, Eric Clapton, George Harrison, Grateful Dead, Hall & Oates and Kiss, just to name a few.

In closing the band has this to impart to their fans and listeners, “We have been together for over 15 years now and truly appreciate all of the support of our fans and listeners. You mean everything to us. We work very hard to not only put out great studio albums but to put on great live performances as well. As always, please spread the word and Step into the Circle… You’ll be glad you did!”

To purchase Circle Of Fate’s “The Other Side Of Me” single: http://www.circleoffate.net/Circle_of_Fate/Store.html

Leave a comment | posted in Circle of Fate, Press Release