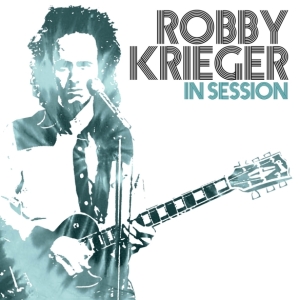 Los Angeles, CA – He is undoubtedly one of the boldest rock guitarists of all-time, a pioneering songwriter who fused classic blues with California psychedelia to create some of rock music’s greatest songs including “Love Me Two Times,” “Touch Me,” “Love Her Madly” and more. And, of course, he was a founding member of one of the most critically and commercially adored bands in history, The Doors. But in the time since his tenure with that iconic outfit, Robby Krieger has not simply rested on his laurels. Instead, he has gone on to release a series of solo albums that found Krieger and his trademark Gibson SG adventuring into the outer reaches of space rock, jazz, classical music and more! Krieger has also collaborated on several studio recordings that reinterpreted classic songs by The Beatles, Pink Floyd, Supertramp and others. Now, a new collection of these studio sessions, including two exclusive, never-before-released mixes and a bonus live recording available on CD for the first time. In Session features an incredible roster of guest appearances including Jackson Browne, Hawkwind’s Nik Turner, Asia’s John Wetton, Styx’s Tommy Shaw, and even the Star Trek captain himself, William Shatner! Don’t miss this incredible collection available everywhere February 17 from Purple Pyramid Records.

Audio Fidelity To Release “The Best Of The Doors” On Quadraphonic 4.0 Multichannel Hybrid SACD

Audio Fidelity To Release “The Best Of The Doors” On Quadraphonic 4.0 Multichannel Hybrid SACD

Available in multichannel for the first time since 1970!

Camarillo, CA – Much to the excitement of Doors fans and music fans worldwide, Marshall Blonstein’s Audio Fidelity will be releasing “The Best Of The Doors -1973” On Quadraphonic 4.0 Multichannel Hybrid SACD! The 2-channel stereo and DSD layers of the hybrid SACD were remastered from the original 2-track tapes which are available for the first time since 1970. The 4.0 Quad layer mirrors the earlier CD-4 QuadraDisc format, Quadraphonic 8-Track and reel-to-reel tape. “The Best of The Doors -1973” compilation album was also released in standard Stereo.

The Doors were among the most controversial, influential and unique rock acts of the 1960’s and beyond. After the death of Jim Morrison in 1971, the remaining members, Ray Manzarek, John Densmore and Robby Krieger continued as a trio until disbanding in 1973.

Each of the tracks on “The Best Of The Doors-1973” have been taken primarily from the original two-track masters of the eight albums recorded by the band between 1967 and 1971. Three of the band’s studio albums, “The Doors” (1967), “L.A. Woman” (1971), and “Strange Days” (1967), were featured in the Rolling Stone list of The 500 Greatest Albums of All Time. The popular rock magazine also listed The Doors as “One of The 100 Greatest Artists of All Time!” As a matter of fact The Doors have been listed as one of the greatest artists of all time by many magazines and in 1993 were inducted into the Rock and Roll Hall of Fame.

Producer – Paul A. Rothchild
Producer – *Bruce Botnick and The Doors

Leave a comment | posted in Press Release, SACD, The Doors