King Crimson comes to the Greek Theatre in Los Angeles on Wednesday, June 21, 2017 with what co-founder Robert Fripp, left, considers a double-quartet lineup. Of the eight musicians in the group, bassist Tony Levin, front and fourth from left, has been in the longest after Fripp. Photo by Dean Stockings

King Crimson, the English rock band co-founded by guitarist Robert Fripp, kicked off its summer tour in Seattle earlier this month on a run that brings them to Los Angeles this week, and while the band had been off the road since December it’s safe to say the eight musicians in the band hit the stage in tip-top form despite the creatively complex music in which King Crimson trades.

“It is complicated music,” says bassist Tony Levin, who after Fripp – the only constant member of the band since it formed in 1968 – might be the longest serving, having joined in 1981. “And because King Crimson is a very conscientious band we rehearse a tremendous amount.

“Robert really wants the band from the first show to be capable of doing a show unlike anything anyone has heard,” Levin says. “So we spend a lot of time and a lot of money, frankly, getting all eight guys together.”

Well before King Crimson arrives at the Greek Theatre in Los Angeles on Wednesday, June 21, Crimson’s three drummers – Pat Mastelotto, Gavin Harrison and Jeremy Stacey – spent a week or two practicing on their own, Levin says.

The rest of the band – Fripp, Levin, multi-instrumentalist Bill Reiflin, singer-guitarist Jakko Jakszyk, and saxophonist Mel Collins – then joined them in England for two weeks of rehearsals, with another week still to come at the time we spoke in the last week of May.

“When we get together we don’t just remind ourselves of the material,” he says. “We’re actually constantly trying to reinvent it, and change it if necessary, to make it into the kind of music King Crimson should be.”

For the rest of the article, please visit the Orange County Register website!

LAS VEGAS — Carlos Santana frowns. The look is so uncharacteristic, because this whole afternoon his expression runs consistently from beatific to boyish and back. He riffs amiably about receiving inspiration from angels and discloses secrets about his quest for the “universal tone,” about how he learned to distill longing and joy in a single note — that pristine, piercing Santana sound that’s instantly recognizable from San Francisco to Singapore.

But now he’s standing on a hotel balcony 43 stories up, where a photographer has just asked him to climb onto a table, the better to pose against the neon skyline.

The guitar player balks: “Why do I have to be put on a pedestal?”

Santana winks. He’ll do it, on the promise that the effect will not be pedestal-like.

At 66, he has an uneasy relationship with the pedestal — the one that he at once covets, disdains and sometimes doubts he deserves. The one that people want to place him upon — except when they don’t, during those dispiriting droughts when the music-buying public all but forgets him.

As a GOP political strategist, John Brabender had been on countless conference calls in countless conference rooms like this one. Late Halloween afternoon, he was at the National Republican Club occupying a room the color of oatmeal. He had a dozen political heavyweights on the line, and was pacing with the steady rhythm of a sloth bear in captivity.

Brabender is best known as the top strategist on Rick Santorum’s 2012 presidential bid, though he has helped run campaigns in almost every state. Clients have included senators Tom Coburn and David Vitter and former Pennsylvania governor Tom Ridge. 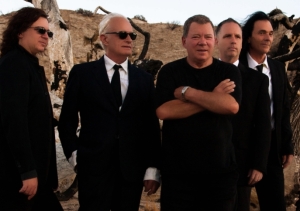 William Shatner will take his latest musical project, a progressive-rock album he recorded with members of Yes and other prog-rock and fusion musicians, on the road for three Los Angeles-area performances during which he will perform “Ponder the Mystery” in its entirety.

For the full article, please visit the LA Times website!