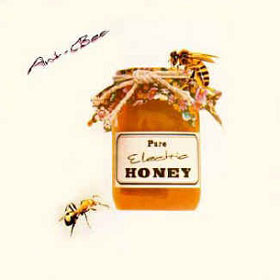 Though it far too often is the case, avant garde music need not be chilly and foreboding. Sometimes it can be warm and inviting, while still maintaining its outré, weird-and-wonderful characteristics. That’s the case with Pure Electric Honey, the 1988 debut album fromAnt-Bee, reissued on CD in 2013.
Pure Electric Honeycertainly bears few sonic hallmarks of the late 1980s. Some sonic touchstones include Frank Zappa‘s late-sixties music; the legendary SMiLE sessions from Brian Wilson; and (relatively) more modern artists such as The Residents and – most notably, I think – Elephant 6 Collective artists Olivia Tremor Control. Now, Ant-Bee (essentially Billy James and a large cast of other musicians) recorded Pure Electric Honey long before OTC cut their debut long player Music From the Unrealized Film Script, Dusk at Cubist Castle, but the two acts are clearly kindred spirits, even if they arrive at sonically related destinations via different pathways.

For the full review, please visit the Musoscribe website!

The Gonzo Daily Interview with Ant-Bee 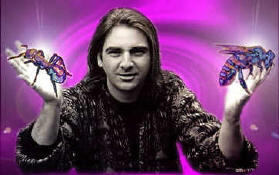 Yesterday teatime I did one of the most intriguing interviews of my career so far. I spoke to Billy James, who – apart from being the main publicist with whom I have been dealing in recent months, is also main man of Ant-Bee – perhaps the most singular artist on Gonzo (and that is up against some stiff competition).

I have a copy of his/their most recent album Electronic Church Muzik and it is one of the most challenging and interesting things I have heard in ages. The list of guest contributors is very impressive with more Gong, Focus and Mothers of Invention alumni than you can shake a stick at. Billy is pictured below with Gilli Smyth from Gong.

I couldn’t wait to talk to him…

Jon: I think it’s jolly good. I was surprised how with such a wide and diverse collection of people you’ve got playing on it how cohesive the whole thing sounds

Billy: You have to remember that I’ve been working in sound collages for many, many years – that’s one of the things I do – I am really into editing and dubbing things and sound collages. Almost like the way Zappa used to do it on Only in it for the Money – that one piece The Chrome Megaphone of Destiny – have you ever heard that piece?

Billy: I’ve always found that type of material very inspirational and also very interesting and just working with sound collages, you know – musique concrète – and so the other thing you have to remember is that the previous album was Lunar Musik which Gonzo is going to be releasing with the rest of the back catalogue, which took three and a half years to make. This last record took me ten years to make, so I had a lot of time to think about how things were going to be in song order and a lot of the structuring.

There’s a reason why it took so long to do it but I did have quite a bit of a time to figure out how pieces linked together and then some of them sort of cosmically linked together in their own way, you know, once I started working with them, but there’s a bit of a dynamic thread through it. It’s almost a sort of stream of consciousness type of a record, sort of examining the spirituality of man and woman and that’s what it is all about.

Not really laying any sort of trip to you, it’s just a trip. Not feeding you anything, it’s just something there to eat if you can figure all that out, but anyway that’s what it is. It did take a long time to work and this and that. Do you want to know why it took so long?

Billy: Originally studios – you know the studios that I was working in where I was living in one city about ten years ago after Lunar Music came out and did quite well actually and I went and I toured with the main songwriter and one of the founding members of the Alice Cooper group, Michael Bruce. And there was other projects that I was involved in before I started working on it. But anyway, when I started working on this record, the studios I was going into was very expensive and so with not having the backing of a record label at the time, the two records that I did came on Taste and Divine records which was My Favourite Vegetables and then Lunar Musik which came out in 1998. I didn’t have any backing from a record label and the type of music I do there’s just not that many labels that understand what I’m doing and the commercial potential – as with Zappa’s music, there’s no commercial potential – even I find quite a bit of it, but…

So at any rate, it was up to me to finance the thing as the bottom line and going in the studios that are like $60 to $70 an hour and then you’re only able to go in at certain times – you can’t block book space, and in between a lot of other projects I was working on and being hired to work on – so I was only able to go in there maybe a couple of times every couple of months, every few months, and movement was very, very slow.

Finally I relocated to another city in North Carolina where I’m at, which is called Asheville which is sort of like a mini hippie town in the mountains of North Carolina. I purchased a recording console and set up my own studio and I proceeded then, and this was probably about three years ago, so we’re seven years in. Every single night, for two years straight – just about two years straight – I would record. And I worked and worked and I have hundreds of different versions and all kinds of material and, you know, so what you get out of Electronic Church Musik is only a fraction of some of the pieces I was working with editing together and …because I have another two albums’ worth of material but I don’t know when I’ll finish them up.

So at any rate I was able to work every single night for two years just about as well as doing my publicity work and put together Electronic Church Musik. Finally I was able to do the whole thing here, really; edit and put everything together and most of the tapes, with the other musicians were all sent to me either – you know they were so long ago.

Peter Banks sent me his tracks on DAT tape so I had to find someone who had a DAT player that dubbed those over. Jan Akkerman, I think he originally sent me his piece on cassette, and I think I had to transfer that over. I believe it was and I think it was the same with Michael Bruce….. it was so long ago, it was like in the 90s – we were still using cassettes. High grade cassettes, you know. CDRs were expensive back then so some of the mediums are different mediums, and some of them later on came as CDRs and then some through the computer – mp3 type stuff, so I had all kinds – I still do – I had hours and hours of material to work through from these artists that I’ve either worked with in the past or recorded with or I had done publicity for and so they got to know me in that respect and then got to know that I’m a musician and my music and were impressed with it and decided they want to work with me, so there’s different ways a lot of these musicians I work with.

So anyway, a couple of years ago I finally had the chance to work with it, put it together , spend night after night and a million mixes and finally came up with what you have there. I wouldn’t say it’s 100% of what I like. You know, there’s certain things you go back and I was still learning the recording console at the time, so that was the other thing. I think now when I listen to it that there are certain things that I would have remixed and done just a little bit different, but you either have to put a stop or a finish date or end up pulling a Brian Wilson’s Smile and you never finish it. So I just had to say finally this is it. It’s the best I am going to be able to get right now. I’ve got to put an axe on it and get on with it and get on to something else. And that’s what churned out. And the reviews, other than maybe a couple of odd ones in the Netherlands oddly, everywhere else: Greece and Germany and a lot of great ones in the UK and several good ones here in America. All rave reviews, so it’s been very good and I’ve done several interviews for it, and that’s just what it is. Just another piece of Ant-Bee history that is out in the world right now.

Jon: Did all the contributors that you worked with do their stuff individually and just send it tapes to you, or did you actually record with any of them?

Billy: Some of them did and some of them didn’t. When I was living in Los Angeles I worked with some of the original Mothers of Invention – this was back in I guess 1990, so I don’t know how many years that is. 20 years ago or something like that – Bunk Gardner, and Don Preston and Jimmy Carl Black. And so that material was actually recorded. Some of the stuff I use even to this day was recorded back then. I had Bunk actually come out to my house in Encino, California and I paid him a fee and had him blow horn for three hours. So I have hours and hours of him playing clarinet and flute, you know, just so I knew I’d be using it 30 years later.

And I still do. I’m still using all this material. He also had tapes of him and his brother Buzz from the 70s that are just free form jams that he also gave me carte blanche to use certain sections of that and added them together and use things. And then also Don Preston. When I was out there I went over to his house- well actually it was like a studio, a king of weird studio/apartment in Los Angeles and he had a work room and we sat in there and I gave him some musical ideas and this and that and we worked together recording that out there, which I am still using. Some of the stuff he’s sent over to me recently as well.
Some of the material I did with Michael Bruce was when we were on the road – we were able to go into the studio several times and I was able to get him to record some things as well and then, like I said, the Peter Banks stuff and Jan Ackerman and David Allen – all that type of stuff was sent to me. Gilli Smythe – that stuff was all sent to me, you know, through the different mediums. They weren’t here when they did it, even though I’ve met all of them and been in touch with all them, and then Napoleon Murphy Brock’s part – vocal piece that was sent. Him and Don actually did that together at some point. I think at Don’s house and then sent it over to me. So that’s just the way I’m able to work. It’s too expensive to fly people out here and do it all, and everyone pretty much lives in separate parts of the country.

And so the first part ends. We will continue with this remarkable conversation tomorrow..
Posted by Jon Downes