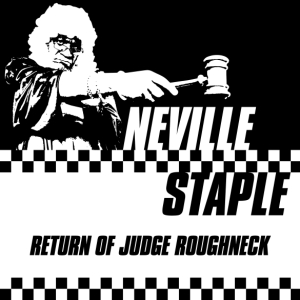 Neville Staple recreates his famous Judge Roughneck character, first seen as part of the “Stupid Marriage” song from the Specials debut album on 2Tone Records. Be prepared for a super ride through classic Jamaican early reggae tunes, ska stomping rhythms and new tracks that fit perfectly with echoes of 2Tone and Bluebeat mixed with Trojan music styles. Part 2 of the album, a full set of bonus Dub remixes, takes you on a dub journey with atmospheric vibes, toasting fun and twisted song versions.

A special video release of the lead track “Return of Judge Roughneck” will premiere on Vive Le Rock’s website to coincide with the official album release date of February 17, 2017 release. Shot by Lee Cogswell and Daniel Thompson (production storyline & casting by Christine Sugary Staple, also featured), at various locations in the 2Tone City of Coventry in the UK’s West Midlands, including the heritage building of the historic ‘Coventry County Court’ (now a restaurant called the Establishment), where Neville was sentenced to borstal during his youth. Further locations include Coventry University’s Moot Room, the local Council Chambers, St Mary’s Guildhall and the Belgrade Theatre. Expect a fun ska dance video filled with Judge Roughneck’s take on the World of politicians, bankers and bullies, along with dancing barristers and cocky jailbirds.

Check out a preview of the video here: https://www.youtube.com/watch?v=yPQS4cEnZ5Y&feature=youtu.be

The album features the Neville Staple Band musicians, guest musicians including former Geraldine Fibbers and The Jayhawks violinist Jessy Greene, and Neville’s wife Christine Sugary Staple, who co-produced the album with Neville and Tom Lowry (Planet Studios), with additional mastering work by Mike Bennett. Return Of Judge Roughneck will be available on both CD and in a special limited edition 2LP vinyl package!

Los Angeles, CA – The Original Rude Boy returns! Neville Staple, charismatic vocalist/toaster for one of the most celebrated 2 Tone ska bands ever, The Specials, reclaims his place in the spotlight with a triumphant new album to be released on Cleopatra Records on May 13. Entitled Ska Crazy!, the album features phenomenal cover versions of ska/reggae classics by Prince Buster (“Time Longer Than Rope”), The Slickers (“Johnny Too Bad”), and Max Romeo (“Wet Dream”) plus brand new compositions including “Rude Boy Returns,” “Girl,” and the gritty single “Roadblock,” which will make its worldwide debut in a professionally shot music video that premieres on the syndicated music/pop culture webzine Something Else! this coming Monday, April 28.

From the cinematic opening scenes of urban decay filmed in Neville’s hometown Coventry, England, the video bristles with tension as the song’s melodic hook, a killer horn-guitar combo riff, pulsates over shots of graffiti walls and CCTV cameras, like the title sequence to a lost season of The Wire. The dramatic plot of the video, a drug deal that erupts in violence, unfolds as Neville and fellow toaster Daddy Woody act as a Greek chorus warning against youthful hubris. Director Joseph Wallace comments, “I wanted to film a video that approached the subject of street crime seriously, yet still very much retaining the relaxed mood and chilled tone of the music. I wanted Neville walking through Coventry’s cold, empty streets at night singing to the camera as though almost preaching his message; weaving in and out of the narrative itself and blurring the line between performance and social issues.” The video was produced by Rawline Entertainment.

Staple enthuses about the album, “I am so pleased and proud to have put this album together as it includes some old time classic favourites, which I grew up with and which I have added some ‘original rudeboy’ flavour to. My current band are brilliant and they put a lot of time into creating that authentic Jamaican sound with me, that you will hear in the tracks, as well as helping me with the creation of brand new material. You will also hear a lot of vocals from my wife Christine and my good friend and Jamaican DJ artist, Daddy Woody. I hope you all love it as much as I do and I’m dedicating the album to Jerry Dammers and my cousin Alvin who helped me on the way to a career in music.”

To pre-order the CD or vinyl on Amazon: http://georiot.co/3u10

To pre-order the digital album on iTunes: http://georiot.co/21ea

For the latest information on Staple, visit: https://www.facebook.com/NevilleStapleBand