SWORDS – A Winter. A howling deep from within, the expression of your true nature… a letting-go of the internal struggle. A releasing from the mental prison, the Winter of your mind. Acknowledging it’s simply a perception away…your desire, peace, satisfaction, balance.

Essentially SWORDS is about self sabotage… how we push away what we truly desire, be it with people, places or things… the subtle disconnect from our inner being.

Says Tracey, “I pulled the term SWORDS from the suit in the Tarot. Those of you who aren’t familiar with it, the symbolism of SWORDS in the Tarot represents the element of Air (my Sun sign Gemini), thoughts, communication and even heartache from either pain or pleasure. As I find Tarot useful in self-examination and discovery, I decided it would be a perfect fit to express the ever popular topic of shadow-work; the working on our darker sides; the parts of us that might be negative and not in alignment with Divine love.”

The thirty year career of this singer/songwriter/recording artist has afforded her the opportunity to record with Grammy Award winning producers in Philadelphia, PA  (Al Alberts Jr, Sound Spa Studios)  & Miami, FL (Ron and Howard Alberts, AudioVision Studios) and perform with such greats as her late husband, renowned jazz guitarist Larry Coryell, guitarist Jorma Kaukonen (Jefferson Airplane), acclaimed jazz/rock drummer Alphonse Mouzon and the legendary Les Paul. Her children’s song-book “Tilikum’s Dream” was published by Eifrig Publishing in 2015 and she is a two-time recipient of the ‘Best Love Song’ award from the Songwriter’s Showcase of America (SSA). Two previous albums include, “Traceyland’s Emotional Roller-Coaster” (2002) and the album “Eleven:11” (2016). Coryell’s latest full-length album, “RaVel” dedicated to her late husband Larry Coryell, released in December of 2019 and features a ten-song collection of emotionally charged, heartfelt compositions delivered with her earthy, sultry, compelling vocals exploring and fusing the styles of pop, rock and countrypolitan.

Since then she has released 4 singles along with videos:
(2019, 2020) Lead vocals for rock songs “Intense” and “For You Babe” in collaboration with the band Carpe Diem & Fr V from Poland.
(2021) Original Christmas song, “Magic of Christmas”
(2022) Original dance-rock song, “Swords”

SWORDS music was pre-produced by Tracey utilizing and editing sound samples.  She also recorded all of her vocals in her home studio.

Co-produced and Mixed by Andres Roca
Mastered by Ivan Jackman

Swords Official Music Video will be available early February 2022. Next Digital SINGLE is currently in pre-production and is tentatively scheduled for an April release.

Los Angeles – Much to the excitement of music aficionados worldwide, Jazz guitar icon Larry Coryell, one of the most respected and celebrated guitarists of his generation, offers a brand new album of seven original compositions titled “Barefoot Man: Sanpaku”!

Says Larry, “I was inspired by John Lappen’s suggestion that I do a recording similar to one that I did in the 70’s that had a lot of energy. Using that as a template I carved out several compositions that I felt would be appropriate. The result was better than I expected; I had a great rhythm section in John Lee and Lee Pierson, and the soloists from Florida, Lynne Arriale and Dan Jordan, played on a world class level. Michael Franklin’s production was hands off except for a few relevant suggestions that really helped round out the project.” 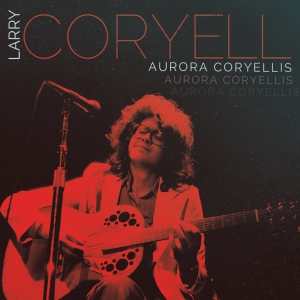 Los Angeles, CA – One of the most respected and celebrated jazz fusion guitarists of his generation, Larry Coryell presents a brand new triple disc box set of unreleased live performances. Titled Aurora Coryellis, this captivating collection highlights Coryell’s prodigious talents in a multitude of settings, from a full band performance in 1972 at the Jazz Wokshop in Boston to a solo acoustic show in 1976 at Clark University (Worchester, MA) plus a more recent appearance in 2002 at the San Jose Jazz Fest with his talented trio featuring award winning drummer Paul Wertico and bassist Jeff Chambers! Each of these performances come on separate CDs in their own sleeves housed in a deluxe box with a lavish, full color booklet featuring extensive liner notes based on a new interview with Mr. Coryell himself. The box will be released July 24 from Purple Pyramid Records.

Reflecting on this collection, Coryell states, “I have fond memories of the high integrity of the students in Worcester, MA; it was always a special place. Of course, The Jazz Workshop Boston was kind of a ‘home base’ from where we developed our music in the ‘70s, when we were trying to create something that respected the basics of jazz but was still a new form of music. Club manager, Freddie Taylor, was our number one booster as we ventured into uncharted territory. And what can I say about beautiful San Jose! A great city with great people and an absolutely beautiful outdoor park in the center of town. Playing with Jeff Chambers and Paul Wertico was an exhilarating journey into the essence of jazz!”

Born in Texas, Larry Coryell began his ascent to the upper echelons of jazz virtuosos in the mid ‘60s when he joined the quintet of famed drummer Chico Hamilton in New York. That gig led to several other stints as a sideman for Gary Burton, Herbie Mann, and Randy Brecker among others. In 1968, he released his debut album Lady Coryell at the young age of 25, which then lead to subsequent solo album and the formation of his own group The Eleventh House. Through these releases, Coryell earned international acclaim for his daring compositions and interpretations as well as his inspired improvisations. He continues to perform shows and release new albums regularly. For those unfamiliar with this living legend, Aurora Coryellis is the perfect place to start!