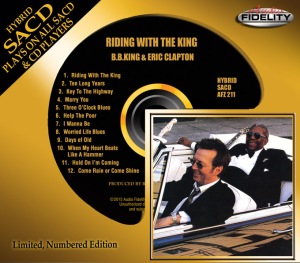 Camarillo, CA – In honor of the recent passing of blues guitar legend B.B. King, Marshall Blonstein’s Audio Fidelity will be releasing B.B. King & Eric Clapton “Riding With The King” on Limited Hybrid SACD. This SACD should satisfy fans of King, Clapton and blues purists alike. “Riding With The King” was Eric Clapton’s and B.B. King’s first collaborative recording and it went on to win the 2000 Grammy Award for Best Traditional Blues Album. The album reached #1 on Billboard’s Top Blues Albums.

They first performed together in 1967 when Clapton was 22 and a member of Cream. Clapton looked up to King and had always wanted to make an album with him. At the time of recording Clapton was 55 and King 74. Clapton arranged the session using many of his regular musicians, picked the songs, and co-produced with his partner Simon Climie. While this would appear to be a Clapton album recorded with King, Clapton gave King center-stage.

The set list includes lots of vintage King specialties, “Ten Long Years,” “Three O’Clock Blues,” “Days of Old,” “When My Heart Beats Like a Hammer,” as well as standards like “Hold On I’m Coming” and “Come Rain or Come Shine,” with some specially written and appropriate new material. King takes Clapton deeper into blues territory than he has ever gone alone and these two artists play the blues with conviction. There may never be another album that links the Delta Blues to modern rock with such style, grace, enthusiasm, and honesty.

Tracks
1 Riding With the King
2 Ten Long Years
3 Key to the Highway
4 Marry You
5 Three O’Clock Blues
6 Help the Poor
7 I Wanna Be
8 Worried Life Blues
9 Days of Old
10 When My Heart Beats Like a Hammer
11 Hold On, I’m Coming
12 Come Rain or Come Shine

Leave a comment | posted in B. B. King, Eric Clapton, Press Release

“An Inspiring Masterpiece From The Guitar God – an essential to the Clapton library!”

Camarillo, CA – Adding to the series of Eric Clapton reissues, Marshall Blonstein’s Audio Fidelity will be releasing Clapton’s 1998 album ‘Pilgrim’ on Limited Numbered Edition Hybrid SACD! From the song titles “River of Tears,” “Broken Hearted,” “Going Down Slow,” “Sick and Tired” on down, ‘Pilgrim’ is the musical journal of an artist who has wandered into some dark places and come back the wiser for his troubles. 1998’s ‘Pilgrim’ is the 13th studio album by Eric Clapton, it was his first album of original material since 1989’s ‘Journeyman’ (also recently reissued on Hybrid SACD by Audio Fidelity).

The album is an intriguing musical tableau that experiments with drum machines and synthesized dashes of electronica and an inventive use of strings, performed by the London Session Orchestra, reminiscent of old-school R&B. There is wonderful, graceful guitar work throughout ‘Pilgrim’, Clapton provides some great hooks and emotional melodies. The best songs on this eloquent album of orchestrated blues meditations express a choked-up grief and despair. The songwriting is the standout feature of this album. Clapton wrote in his autobiography that he wanted to make the “saddest album.” He wrote or co-wrote every song except “Born in Time,” an overlooked Bob Dylan tune, and “Going Down Slow,” a classic blues written by St. Louis Jimmy. In two songs, “My Father’s Eyes” and “Circus,” Clapton alludes to the tragic death of his 4-year-old son. The songs are very moving with more complicated melodies and in depth lyrics. Clapton’s emphasis is placed on the entire arrangement instead of being built around a jam session.

Eric’s voice has never sounded better, his singing is raw and passionate, much of the music is informed by smooth R&B textures. On the album’s sizzling title track, he evokes some of the soulful eloquence of the great Curtis Mayfield. Clapton’s vocals are among the most convincing of his career. ‘Pilgrim’ is an atmospheric album whose mood is mostly melancholy. Unbearable loss and yearning are the central themes of ‘Pilgrim’, and with its heartbeat bass lines, melodic, meditative guitar figures and heartbreaking lyrics, it offers moments of pure beauty.

“…another evolutionary step from an always rebellious and ever-changing artist.”

The album produced multi-platinum sales and appeared on the year-end Top 100 lists of countries all around the world.

“…one of the greatest rock/blues guitarists on the planet!”

Camarillo, CA – Much to the elation of Eric Clapton fans across the globe, Marshall Blonstein’s Audio Fidelity has released Clapton’s ‘Journeyman’ album as a limited numbered edition Hybrid SACD! Eric Clapton is a true legend. ‘Journeyman’ reached #16 on the Billboard album chart and became Clapton’s first solo studio album to go double platinum. Like any of his best albums, there is no grandstanding to be found on ‘Journeyman’…it’s simply a laid-back and thoroughly engaging display of his virtuosity. The album was heralded as a return to form for Clapton, much of it has an electronic sound, mostly influenced by the 1980s rock scene, but it also includes blues songs like “Before You Accuse Me,” “Running on Faith,” and “Hard Times.”

“At the center of it all is Clapton’s guitar work…stinging blues and soaring pop.”

Clapton sounds more convincing than he had since the early ’70s. Not only is his guitar playing muscular and forceful, his singing is soulful and gritty – he seems to have struck the perfect balance between the fiery blues of his youth with the pop flavorings of his later years.

TRACKS:
Pretending
Anything for Your Love
Bad Love
Running on Faith
Hard Times
Hound Dog
No Alibis
Run So Far
Old Love
Breaking Point
Lead Me On
Before You Accuse Me

“…another great recording…perhaps the most experimental of his career”

Camarillo, CA – Eric Clapton fans are buzzing with excitement over the release of his critically acclaimed 1985 comeback album ‘Behind The Sun’ on limited numbered edition Hybrid SACD on Marshall Blonstein’s Audio Fidelity! The musical climate had changed dramatically from the days Eric Clapton had topped the charts in the ’70s. ‘Behind The Sun’ is not his first album of the decade, but he obviously understood it was time to modernize his sound. After signing with Warner Brothers in 1983, Clapton bounced back on the music charts for the first time in five years, and solidified his return in 1985 with the instant success of ‘Behind The Sun’, his ninth album.

Backed with a line-up of stellar musicians and producers Lenny Waronker, Rod Templeman and Phil Collins, Clapton for the first time in years now had several songs that reached a wider audience, scoring Top 40 hits with “Forever Man” and “See What Love Can Do.” He didn’t abandon his old music, he just blended it more effectively and brought the flavor up to date by mastering the more electronic sound of ’80s radio.

This album also had a heavy soul flavor with a really well produced version of Eddie Floyd’s “Knock On Wood”, and Clapton remained true to the blues with a brilliant eight minute track, “Same Old Blues”, which contains some of his most electric playing of the era.

“Back in the spotlight…this comeback album is an underrated classic – Don’t miss out on this gem!”