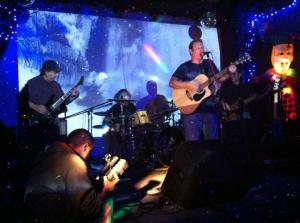 5/8/2012 – Boston, MA – One of the most talked about group’s of 2011, Boston’s Blue Moon Harem, are celebrating the positive reaction to their latest CD release ‘Finland’ from the music press and fans alike around the world. Having survived some of the toughest years in the music business, the dynamic and diversely-talented duo at the heart of Blue Moon Harem, guitarist Demetri J and guitarist/vocalist Jon Bix released their second CD ‘Finland’ in early 2011; a remarkable collection of creative non-categorical modern music, which also boasts the talents of drummer Steve Hart, who previously worked with Aerosmith axeman Joe Perry, among others.

Singer/songwriter Jonathan Bix is the voice and soul of Blue Moon Harem; Jonathan delivers a towering yet vulnerable vocal performance which mesmerizes and captivates audiences everywhere. Guitarist Demetri J, the band’s co-songwriter, along with Jonathan, writes the incredible music that is the heart of Blue Moon Harem. Demetri deftly combines keen instinct with raw talent to create passages of atmosphere, beauty and power.

Here’s what the press has been raving about ‘Finland’:

“Remarkable from the start is the breadth and strength of Jonathon Bix’s vocal presence, but also the arrangements and partner Demetri Joannou’s versatile guitar work. Add to this the fine production and you have crisp, clear, and interesting collection of tunes.” – Craig Hartranft, Dangerdog Reviews

“This is very radio friendly stuff but hardly fluff. I could listen to the album several times and never come to the conclusion that maybe BMH are trying too hard to keep it safe. Production on the entirety of the album is fantastically crisp. Guitar work here is so solid and life like you’d think at times the performance was being performed in whatever room you may be enjoying the album in. Vocals are fantastic as well.” – Al Garcia, Shakefire.com

“This 11 song CD titled ‘Finland’ is the product of a lot of time and effort and it’s a disc I’m sure they’re proud of. It’s a very radio friendly album with mass appeal.” – Richard Oliver, Ear Candy Magazine

“If I put their music on and don’t shut it off within 30 seconds or so, I feel as though I may be onto something. If I listen to the entire album and then start from the beginning and listen to the whole thing, I know I am onto something. That was the case with Blue Moon Harem’s latest album.” – Real Rock News

“ ‘ Finland’ is a truly amazing compilation emphasizing awe-inspiring verse, breathtaking intonation, and ingenious melody. The album is an incredible selection of GREAT music. It’s bands like Blue Moon Harem that should be immediately signed to a recording contract and showcased over the airwaves.” – Ray Sasho, Examiner.com

“I’m pleased with the response we have received from the ‘Finland’ album,” says Demetri. “It seems as though people are liking what they are hearing. The album was a product of many years of soul searching. We feel that we have finally hit our stride with this album and I’m glad others seem to feel the same.”

In the last few years, praise for the band’s first hit “Addiction”, from the eponymous debut CD ‘Blue Moon Harem’, has quickly spread all across the New England states. Beginning with airplay of this pulsing alternative rock hit on WAAF’s local radio show in Boston, along with the group’s other hits, “Ride” and “Dog’s Life”, Blue Moon Harem’s popularity has grown to such a level that their music has been featured in the independent film ‘Under Surveillance’ from New York based Fourth Horizon Cinema and other films from Sorry Dog Productions.

Blue Moon Harem’s acoustic sets have become a regular occurrence in New York clubs and the band continues to expand its touring schedule almost as broadly as their musical repertoire. “New York is embracing them with several shows set from Brooklyn to Manhattan,” says Keli Pearce, CEO of 7th Planet Entertainment Group. “Both members are gifted musicians whose sole goal is to have people hear their sound! Talent, versatility and humility – these guys are abundantly equipped with them all!” Along with Steve Hart on drums and Pep Hernandez on bass, Bix and Demetri have been performing (electric) throughout Massachusetts. On February 2nd, 2012 BMH performed an acoustic concert at the Armory in Somerville, MA opening for FBI featuring Jon Butcher of Jon Butcher Axis fame. The show was sponsored by WAAF, whose music director Carmelita, a big supporter of the band, personally invited BMH to perform.

Not resting on their laurels, Blue Moon Harem are back in the recording studio working on their next album with a tentative release at the end of 2012. “The next album is going to be more of a fun and energetic album,” Demetri explains. “Whereby ‘Finland’ was more of a serious sounding record, the next CD will cross new borders within the Rock/Americana genre. The songwriting has reached a new level for us and we are excited about getting our new material recorded and published. We are shooting for an end of the year release.”

In closing Demetri has this to impart, “Blue Moon Harem has been attracting great attention from writers and fans across the globe. Our message is clear – we want people to listen to our music and become inspired. We write about the full gamut of emotions and experiences that many people can relate to.”