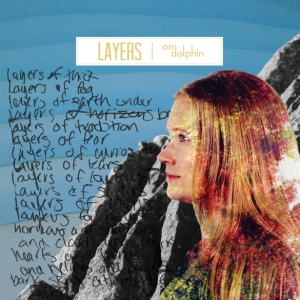 San Francisco – Bay Area music ensemble On Dolphin will be releasing their debut album “LAYERS” on vinyl on July 22, 2016! Fronted by Melissa Lyn, the band’s music has been described as “Indie rock for people that are hopeful and curious.” The band’s new album explores the evolutions of ideas from curiosity and experience to beliefs and knowledge. And, finding comfort within the structures of family and community while making space to be.

“The sounds range from straight forward rock on the opening track ‘more good days’, the thick drum beat and dreamy soundscape of ‘dance in the kitchen’, to the textured and orchestral dynamics of ‘New York’ and title track ‘Layers’.” – FalafelRockNews

“LAYERS” – This album was born in a barn – Melissa Lyn

“Fresh out of a relationship and laid off from my day job, I left the city on a series of travels and adventures, landing in a Barn in Northern California. I was settling into my new home, reflecting on poems and sounds from my trip to Africa, when I finished writing the title track ‘Layers’ and the following song ‘Worth the Drive’. I was exploring the contrasting layers of traditions and comfort amidst new beliefs and landscapes.

“In The Barn, I was surrounded by 360 degrees of nature, with horses downstairs and chickens outside. It was peaceful and inspiring and I was writing a lot. The songs ‘Dance in the Kitchen’ and ‘Inventing Fences’ are stories of my assimilation into the new space and the community that was quickly growing around me. I became very active in the local music scene attending weekly open mics. One night, at Bazaar Cafe I met Ryan Clark. It was a pleasant meeting, though neither of us predicted that we would marry exactly one year later.

“Ryan was building his recording business and helped me prepare and complete my first solo EP ‘Roads’. We set up a part-time recording studio in the bedroom at The Barn. Friends and band mates joined us for retreat-style recording. ‘Together’ and ‘Laugh it Off ‘are a tribute to a community of musicians working together to bring songs and ideas to life.

“We married and moved into a tiny room in the city of San Francisco, a huge transition from the country space that The Barn provided. Writing continued to be the best way to identify new feelings and reflect on joys and pains. ‘Slowdown’ and ‘More Good Days’ represent the challenges of a crowded city life. I made space for myself in Yogic chanting and joined the Vak Choir project. ‘Let a Little Light’ was born as I explored my breath and sound in a new way.

“We found more space in a larger apartment down the road and began building our life, and this album, together. Ryan is an amazing producer and multi-instrumentalist. His arrangements and vision really brought these songs to life.

“To say that our friends’ vocal and instrumental talents added color and texture to these recordings is an understatement. These folks add color and texture to our lives. The support in the San Francisco songwriting community is like super food to a developing musician. The contrasting layers culminate in New York. A ‘coming home’ song about Love & Frustration, Wanderlust & Home.”

“Worthy of a Quentin Tarantino film, ‘Worth The Drive,’ by On Dolphin is worth the listen.” – Indie Shuffle

Melissa Lyn – guitar & vocals: An active member of the SF songwriter scene since 2008, Melissa Lyn hosted and curated, Songwriter Saturdays at the Exit Theatre. She has booked and shared the stage with over 150 bay area songwriters and bands between 2011 and 2015. She released her debut solo EP Roads in 2012 and started On Dolphin in 2015.

Anderai Maldonado – bass: Anderai has performed in numerous musical projects from ska to jazz… From Puerto Rico to San Francisco. Crafting bass lines that move you.

Nathan Dennen – keys: Born and raised in the small country town of Oakdale, California, Nathan started learning piano at the age of six. Though he took a couple years off to teach himself guitar he eventually fell back into his old piano playing ways and started writing songs. His music has been described as a mash-up of old saloon style, mixed with a little jazz and a touch of folk funk; if such a thing exists. http://www.nathandennen.com

In closing On Dolphin has this to impart, “Peel away the layers, live truth!”

To purchase On Dolphin’s “LAYERS”: http://www.ondolphin.bandcamp.com

Leave a comment | posted in On Dolphin, Press Release