Listen to VANILLA FUDGE on Little Steven’s Underground Garage and Win a Trip to See The Fudge Live in Concert! 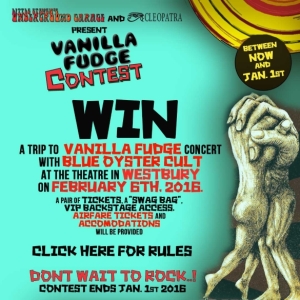 Listen to VANILLA FUDGE on Little Steven’s Underground Garage and Win a Trip to See The Fudge Live in Concert!

Los Angeles, CA – During the month of December, Little Steven’s “Underground Garage” syndicated radio show will be featuring the new VANILLA FUDGE single “I’m A Believer” and to celebrate, Cleopatra Records and Vanilla Fudge would like to reward one lucky customer with a free trip to see VANILLA FUDGE with BLUE OYSTER CULT at The Theatre In Westbury in New York on February 6th, 2016!

In addition to the trip to see Vanilla Fudge, the winner will receive VIP Backstage Pass and a limited-edition Swag Bag to boot!

The rules are simple – go buy a copy of the new VANILLA FUDGE CD or LP for “Spirit of ’67”, take a selfie of yourself holding up the LP or CD and go to this link to upload your selfie and proof of purchase: http://flyt.it/winvanillafudgetickets

VANILLA FUDGE will be hosting the drawing on January 4th in New York City – winner will be contacted by the band shortly after the drawing.

Vanilla Fudge drummer Carmine Appice boldly declares Spirit Of ‘67 to be “the best album we’ve done since our very first album. Great vocal arrangements and instrumental performances from everyone in the band!” Founding member and lead vocalist and keyboardist Mark Stein agrees saying, “Spirit Of ’67 is a record that I’m proud of. The success of Vanilla Fudge has always been based on our interpretations of songs by great artists. Our style of classic & symphonic rock lives large on this effort, and the performances and arrangements I would hope will be enjoyed by both old and new fans alike.” To hear what these guys are raving about, check out the band’s piano heavy take on The Box Tops’ “The Letter” as well as the heaving, guitar fuzz version of Spencer Davis Group’s “Gimme Some Lovin’.” As founding guitarist Vinny Martell puts it, “Spirit Of ’67 is the continuation of the journey we began in the Summer of Love–psychedelic, rhythmically powerful arrangements and performances of happening tunes of that era colored by the insight and vision of who we are today.” Likewise, Sprit Of ’67 itself is both an album about a specific time period yet demonstrates the timelessness of truly great songs.