The Moody Blues’ John Lodge New Single “The Sun Will Shine” OUT NOW!

The Moody Blues’ John Lodge New Single “The Sun Will Shine” OUT NOW!

John Lodge, legendary bass player, songwriter and vocalist of The Moody Blues, and inductee of the Rock and Roll Hall of Fame, has released a new digital single entitled “The Sun Will Shine”. Out now!

In John’s own words:

“On March 8th 2020 we played a sold out show in Lexington, MA, and within a week my wife and I, like so many of us around the world, went into lockdown.

Like all of us staring at our four walls, I realised that this would be a challenging time. And then I began to think about 1967… We went into the studio and were in a sort of lockdown then, where we spent 24 hours a day creating an album that changed my life. That album was ‘Days of Future Passed’. As I looked back I remembered the creativity that took place then, and as I watched the sun rise every morning, I realised that I just needed to see the world differently. I therefore took the opportunity to write and record some new music hoping to explore how I was feeling.

My first single ‘In These Crazy Times’, which came out last year, I wrote and recorded myself on Garageband, and I asked my wife, Kirsten, my son, Kristian, and my daughter Emily’s boyfriend Jon Davison (of YES), to join me. (Emily and I have been working together for many years now). It was an incredible experience to work with all my family on this, and gave us the connection we needed even though we were apart.

I then began to write ‘The Sun Will Shine’, and for this song I wanted to work with my 10,000 Light Years Band, Alan, Billy, Duffy and Jason. Jon also joined me again, and whilst we couldn’t all be in the same room, it was so fantastic to be able to still create music together despite the miles between us. Touring is still in the future, but I can’t wait to get back on the road with my band. I miss the road, the camaraderie with all the guys, performing, and, of course, all the fans, who have been such a support to me over the last 6 decades.

This song was therefore very important to me writing it, and it’s great to see it out there now, hopefully inspiring others and reflecting the start of the end of these troubled times. My hope is that the sun will shine for me, for you, for the world, just like the dawn of a new day and the promises it brings.” – John Lodge, May 2021.

“The Sun Will Shine” is available now as a digital download, on all streaming platforms, and on YouTube as a digital video. The song is reminiscent of many of John’s earlier compositions with its message, orchestration and harmonies, and will be part of the EP “On Reflection” due to be released later this year.

John Lodge is bass guitarist, vocalist, and songwriter for the iconic Rock & Roll Hall Of Fame 2018 inductees, The Moody Blues. Songwriter of such mega Moody Blues hits from “Ride My See-Saw,” to “I’m Just A Singer (In A Rock and Roll Band),” “Isn’t Life Strange?” and many more, Lodge has been performing and recording with The Moody Blues for more than five decades, selling in excess of 70 million albums. Lodge has been voted one of the “10 most influential bass players on the planet,” and has been the recipient of many awards, including ASCAP (American Society of Composers and Publishers), an Ivor Novello Award, a Lifetime Achievement Award from Prog Magazine, to name just a few. With the Moody Blues now no longer touring, John is passionate about “Keeping the Moody Blues Music Alive”, and John and his 10,000 Light Years Band provide a unique opportunity to continue to experience the magic of the Moody Blues. 2021 will see the release of his live album “The Royal Affair and After” and touring is being planned for 2022. 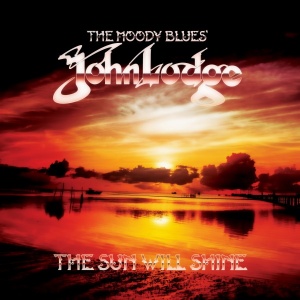 John Lodge, legendary bass player, songwriter and vocalist of The Moody Blues, and inductee of the Rock and Roll Hall of Fame, is to release a new digital single entitled “The Sun Will Shine” on April 30th 2021. Pre-orders available from April 9th.

The song was written and recorded by John whilst he was ‘in isolation’ in Florida, and he took hope and inspiration from watching the sunrise every morning over ‘Cocahatchee Bay’. For John, the song is a reminder that we can choose to see the world, and the challenges we all face, in a positive way…  because the sun will shine again.

The song is performed by John and his ‘10,000 Light Years Band’, who recorded remotely due to the pandemic. The track also features Jon Davison from YES on backing vocals, continuing their ongoing collaborations.

The song will be part of the EP “On Reflection” that is due to be incorporated into “The Royal Affair and After”, John’s new live album scheduled for release in September 2021. “On Reflection” will include three tracks that John wrote during the pandemic. Joining “The Sun Will Shine”, will be his instrumental track, “Sunset over Cocohatchee Bay”, and a 2021 remix of “In These Crazy Times”.  The tracks continue John’s exploration of how the pandemic has affected him, demonstrate his always positive outlook on life, and echo many of his earlier Moodies compositions.

“Who could have thought this pandemic is still with us? I’m just grateful that I have my music to keep me company, and in a surreal way it has kept me focused on writing and recording new songs. I hope with these new songs to share with you my reflections of these times. It’s been a year since I was on the road with my 10,000 Light Years Band but we will see you again in the not too distant future. Thank you for keeping the faith!” – John Lodge April 2021.

During his remarkable 55 years with the Moody Blues, Lodge has sold more than 70 million albums including the groundbreaking “Days of Future Passed”, and has composed many of their biggest hits. The album “Seventh Sojurn” was Billboard number 1 for 5 weeks, and Lodge wrote both the singles from this album, the high-energy “I’m Just a Singer (in a Rock and Roll Band)” and the beautiful and ethereal “Isn’t Life Strange”.

John has received numerous awards including ASCAP (American Society Of Composers & Publishers) and an Ivor Novello for Outstanding Contribution to Music, and he has been voted one of the 10 most influential bass players on the planet. The Moody Blues were inducted into the Rock and Roll Hall of Fame in 2018, and in 2019, John was inducted into the Birmingham Walk of Fame, and was given the Lifetime Achievement Award at the Prog Awards. In 2017 the Moody Blues celebrated the 50th Anniversary of their iconic album “Days of Future Passed” with a hugely successful tour, including a sold out performance at the Hollywood Bowl, and the release of their live album “Days of Future Passed, Live”, which reached the top of US DVD charts. With the Moody Blues now no longer touring, John is passionate about “Keeping the Moody Blues Music Alive”, and John and his band provide a unique opportunity to continue to experience the magic of the Moody Blues.