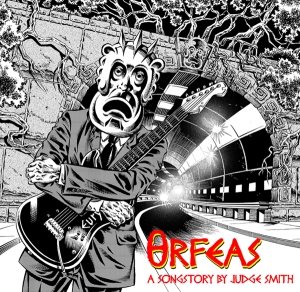 2/28/2012 – London, UK – Independent composer and recording artist Judge Smith, who in 1967 co-founded with Peter Hammill the influential underground band ‘Van der Graaf Generator’, has created a movie for your ears – a new concept CD titled ‘Orfeas’; a retelling of the ancient myth of Orpheus, the magical musican who travels to the Land of the Dead in search of the lost Eurydice. Since his Van der Graaf Generator days, Judge Smith has been responsible for a wide variety of music projects, including four stage-musicals (with productions at the Edinburgh Traverse, Sheffield Crucible and the Lyric, Hammersmith), opera and cantata libretti, songs for the ‘70s TV show ‘Not The Nine O’clock News’, and songs recorded by Peter Hammill and Lene Lovich. His film ‘The Brass Band’ has won several international awards. Judge Smith’s music is complex in structure and often fragmented, but is always tuneful and strangely memorable, with humor never far from the surface. In the course of a twenty-year independent solo career, he has released ten CDs and DVDs.

“My principal interest is in telling stories with words and music,” explains Judge. “Some of my CDs are collections of songs, the usual format for an album, although people say that my songs are unusual and idiosyncratic. However, three of my projects are in a different category. Over many years, I have developed a new way of making extended musical narratives that I call ‘Songstories’, which are more complex than song-cycles or ‘rock operas’. They are not ‘musicals’ either, since they are pretty well un-stageable, and are each intended to be being complete as an ‘audio experience’. The three Songstories are all very different. The first, ‘Curly’s Airships’, a double CD with a running time of two hours and twenty minutes, was completed in 2000 after six years full-time work, and tells the story of the 1930 R-101 Airship disaster. It is probably one the largest and most ambitious pieces of rock music ever recorded. The second, ‘The Climber’, released in 2009, in complete contrast, is performed by me with an unaccompanied Norwegian male voice choir, and a double bass. The third Songstory is ‘Orfeas’, my own interpretation of the Classical myth.”

This Songstory uses wildly contrasting styles of music to tell its story, including instrumental Rock, Mediterranean guitar music, modern classical string sextet music, classical Trance dance music and Death Metal. ‘Orfeas’ also features a radical, and little-known, technique for transforming recorded speech into melody. “As far as I am aware, I am the only person making work like this, and I think it would be probably fair to say that no one else does what I do,” says Judge.

“Best known for his role in the formation of Van de Graaf Generator, Judge Smith is clearly not an artist with much interest in toeing the line. ‘Orfeas’, a three-act ‘songstory’ in which Smith and a host of guest performers re-imagine the titular Greek legend as he headlines at Wembley Arena, is effectively an exercise in schizophrenic musical theatre, replete with rambling soliloquies and plot-revealing dialogue set to avant-garde chamber music, that takes in everything from Jaunty rock radio-jingles and ethereal pop.” Dom Lawson – Classic Rock Presents Prog

In recent news, on November 6, 2011 a performance of Judge Smith’s ‘The House That Cried’ was held in Como, Italy. The show also took place on November 20, 2011 in Chiasso, Switzerland.