British Indie Rock Band The Loft Club is Breaking Out of the UK and Germany into the US!

British Indie Rock Band The Loft Club is Breaking Out of the UK and Germany into the US!

Studio City, CA – Lightyear Entertainment, after initially releasing the debut EP, “Heart’s Desire” from England’s The Loft Club in October, 2016, and a Niklas Ibach remix of the title track in November, is pleased to report that the band has now exceeded 200,000 spins on Spotify, with over 70,000 monthly listeners, has been added to a number of significant playlists, and is gaining a growing number of listeners and followers in the United States.

One British blogger, Listen With Monger, said early on “Essentially, this is the music that the Beatles would have produced if, instead of getting introspective in India, they’d gone to the Mid-West with a burnt out double decker and gone native for a few months. The remix, by producer Niklas Ibach, turns the spirit of the song on its head and…we are treated to a floaty, airy slice of Zero 7 meets Above & Beyond in chill out mode which is no bad thing. So, here we have a talented band with a great single.”

Lightyear CEO Arnie Holland said: “The Loft Club demo showed up with no introduction last summer, and by a stroke of luck, I decided to listen to it anyway. Within 30 seconds I was hooked by the melodies, harmonies, and infectious beat.”

Sky Spooner, Lightyear’s VP of A&R said “The initial plan was to let the band organically grow in its home territory of the UK. But now we’re seeing signs that their followers are spreading worldwide. We’re starting to see spins in the U.S. as well; Manhattan and Los Angeles are in the top ten worldwide markets now. ”

The Loft Club is available worldwide on the Lightyear label through Caroline/Universal Music Group. 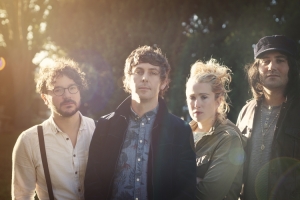 Lightyear Entertainment, a distributor of independent films and music, was founded in 1987. http://www.lightyear.com

This entry was posted on Thursday, April 6th, 2017 at 00:43 and posted in Press Release, The Loft Club. You can follow any responses to this entry through the RSS 2.0 feed.
« TODD RUNDGREN SPANS GENERATIONS AND GENRES ON ‘WHITE KNIGHT’ OUT MAY 12 ON CLEOPATRA RECORDS
The Box Tops Celebrate 50th Anniversary as Part of Happy Together Tour 2017! »