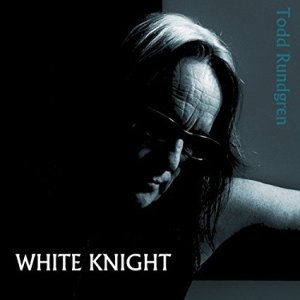 Los Angeles – Todd Rundgren – the iconic songwriter, recording artist, producer and innovator – will release his newest album ‘White Knight’ on May 12 via Cleopatra Records. The 15-track collection features a dynamic range of original songs and deft studio work by Rundgren, with an incredible array of guests to match, including Dam Funk, Donald Fagen, Daryl Hall, Bettye Lavette, Robyn, Joe Satriani, Joe Walsh, and others. Recently Pitchfork unveiled album track “That Could Have Been Me” featuring Robyn.

The songs on ‘White Knight,’ all Rundgren originals or co-writes with some of the album guests, range from hip-hop flecked funk and dystopian synth rock to soaring ballads and crisp power pop. Album opener “Come” swirls with oscillating rhythms and sweeping layers of synths. More squiggling synths drive the feature with Daryl Hall, “Chance For Us,” giving way to a rich sax solo and a punchy, squelching bass line. Robyn soars on the pop anthem “That Could Have Been Me,” while Todd and Donald Fagen harmonize on the timely political jab “Tin Foil Hat.” “‘Cause the man in the tin foil hat / is sitting on the throne tonight / it kinda feels like a coup e’tat / but its gonna be great, tremendous, amazing and all that.”

“It’s easy to get used to playing to your own audience, even if you are absorbing and experimenting with new ideas. I wanted to collaborate not just for the musical possibilities, but also to play for new audiences and expose my fans to the range of artists I enjoy working with.” – Todd Rundgren

Says the New Yorker: “Over the course of his four-decade career, Rundgren has a been a prog-rock pioneer, a blue-eyed soul vocalist, an A-list producer, and above all, a restless presence, never willing to settle.” In addition to his own trailblazing catalog, Rundgren has produced critical landmarks and commercial smashes for artists ranging from New York Dolls, Patti Smith, and XTC, to Meatloaf’s ‘Bat Out Of Hell’ (with sales exceeding 43 million), Cheap Trick, and Hall And Oates. He has composed the music for a number of television series, including Pee Wee’s Playhouse and Crime Story, and been at the forefront of technology in the music industry for decades, whether hosting the first interactive television concert in 1978, offering the first commercially available music downloads, or launching the first direct artist subscription service.

Todd Rundgren will tour throughout 2017 with headlining dates kicking off in late April. Tour dates below with more to be announced shortly.

Vinyl version:
1. Come
2. Got Your Back featuring KK Watson w/Dam Funk
3. Chance For Us featuring Daryl Hall w/Bobby Strickland
4. Fiction
5. Beginning (Of The End) featuring John Boutte
6. Tin Foil Hat featuring Donald Fagen
7. Lets Do This with Moe Berg
8. Sleep with Joe Walsh
9. That Could Have Been Me featuring Robyn
10. Deaf Ears with Trent Reznor
11. Buy My T
12. This Is Not A Drill featuring Joe Satriani with Prairie Prince, Kasim Sulton

This entry was posted on Thursday, March 30th, 2017 at 22:20 and posted in Press Release, Todd Rundgren. You can follow any responses to this entry through the RSS 2.0 feed.
« The Turtles/Zappa & The Mothers Legend Jim Pons Pens New Book “Hard Core Love: Sex, Football, and Rock and Roll in the Kingdom of God”
British Indie Rock Band The Loft Club is Breaking Out of the UK and Germany into the US! »