Jon Anderson on Being Booted From Yes: ‘Anger Isn’t There’ – Billboard.com 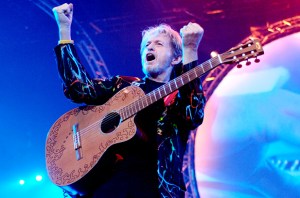 Jon Anderson may no longer be in Yes, but he’s hardly wanting for creative endeavors.

The vocalist, who was bumped out of the band in 2008 after health problems sidelined him from a tour, has just released “Survival & Other Stories,” the first of three planned albums comprised of collaborations with musicians who answered a solicitation on Anderson’s website. Anderson is also working on a couple of “large scale” pieces along with new acoustic versions of Yes songs and an album with former Yes mates Rick Wakeman and Trevor Rabin.

“You open up a Pandora’s box of information, and there’s so much music,” Anderson tells Billboard.com. He also adds that he’s feeling “really, really healthy. I’ve never been happier or healthier in my life. I just feel really good about everything I’m doing.” END_OF_DOCUMENT_TOKEN_TO_BE_REPLACED