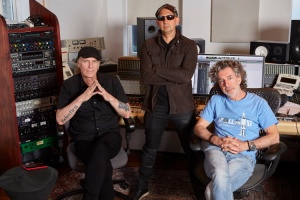 “I started working on this (Nightmare Of My Dreams) shortly after we finished the first ‘Origin of Species’ album. Our drummer Simon Phillips, his home burnt down in a tragic wildfire, and we had been thinking a lot about all the themes of the first album dealing with climate change. Those events actually affected our own lives very directly. I’d been working on some ideas for this song and one night it all seemed to come together. The video was shot in Australia, where we wanted to shoot in an area that had been affected by wildfires and climate change. We really want this song to be a tribute to those dealing with the challenges of wildfires around the world. We hope that people can think about the dangers facing many parts of the world and the challenges of the families who have to get their lives back together after these events.” – DarWin

Following the release of debut album “Origin Of Species” in early 2019, DarWin has now released a new single, “Nightmare Of My Dreams”.

Of the 400 plus videos Nigel Dick has directed this is the first video he has directed remotely. The shoots took place in LA, Nashville, Iceland and Australia – with Nigel himself being in Colorado. Nigel provided the Australian crew with a 27 page storyboard to follow for the shoot in the Blue Mountains, Australia, an area that had been ravaged by fire at the end of 2019. Ironically the fire blistered landscape had begun to grow back green shoots when they filmed, so they had to hide those. Nigel also had to use a real family as actors so that they could work around social distancing. And for the final shot the teddy bear had to be flown across the world to be filmed beforehand had to be quarantined before coming out of its box. A curious tale for these curious times…

DarWin’s critically acclaimed debut “Origin Of Species ” was the first installment in an epic saga that addresses the challenges of mankind in our coming era.  It depicts the role of a changing planet, and the potential, as well as limitations, of technology to help solve mankind’s greatest challenges. A complex project that’s eschews the hollow immediacy of much contemporary art. A story that demands attention and imagination. With music sweeping in scope, at times evoking hard rock virtuoso shredding, alongside grand orchestral compositions, warm harmonies and soaring choruses. A project that is even more relevant in the strange times we live in.

“At the end of it all, DarWin has saved the concept album as well as the planet.” – Classic Rock review of debut album “Origin Of Species”

This entry was posted on Friday, August 21st, 2020 at 15:59 and posted in DarWin, Press Release. You can follow any responses to this entry through the RSS 2.0 feed.
« Instrumentalist Elliot Nelson’s Debut Album “As He Now Appears” Pushes Music to the Brink of Sonic Creativity!
Introducing Acoustik Attak’s New Guitar and Bass “Attak Piks” »