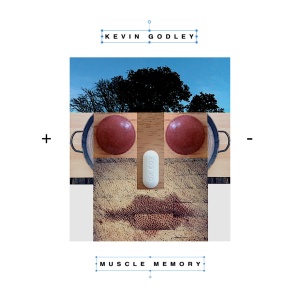 In July 2017 Kevin Godley – formerly of 10cc and Godley & Creme – posted an invitation on the site PledgeMusic: “Write and record with me.”

PledgeMusic was a platform for musicians to connect directly with fans who could pay for music in advance to support the creation of albums. Kevin’s project took the potential of this remote, socially distanced collaboration further.

He explained: “Recently something happened that eclipsed any songwriting techniques I’d learned in 10cc or Godley & Creme. Out of the blue, I was sent 2 recorded instrumental tracks with requests to write melodies and lyrics and turn them into songs. Both tracks came from people I’d never met and still haven’t. Experiencing this kind of remote collaboration and its results has been transformative for me, as I believe I’ve recorded 2 of my best ever songs and MUSCLE MEMORY, as I’m calling the album, will be about opening this collaborative door a lot wider.”

Kevin received 286 instrumentals, choosing to conceal the names of submitters so as not to focus on high profile artists. Of these 11 were chosen for the final tracklisting. The instrumentals vary wildly, from jarring electronic beats to Gotye’s dreamlike balladic contribution, “Song of Hate.”

In May 2019, before any money pledged had arrived to support the album, PledgeMusic declared bankruptcy. With the lists of pledgers gone and the project stalled, The state51 Conspiracy contacted Kevin and funded the project so that those who had paid would still be able to listen to the record they were helping to make.

The album marks Kevin’s first time fronting a project. His lyricism is cutting, political and provides a mood similar to film dialogue over classic pop lyricism. Gun control, societal unrest, racism and questions regarding political correctness make for some of the most striking lyrical content likely heard on an alternative pop record. This is a dark record from someone not known for dark themes.

Kevin’s career features numerous exceptional albums and sees him as one of the most important pioneers of the pop music video. MUSCLE MEMORY is a fitting addition to this body of work, offering a provoking, daring new insight into Godley’s creative practice. Tracks from the album will be released in order every two weeks until the album’s release on the 17th of December 2020.