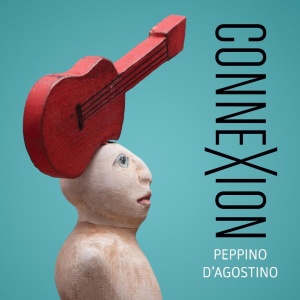 “Peppino writes wonderful guitar pieces. He’s one of my favorite composers for this cranky instrument…I love his sound…” – Leo Kottke

Beloved acoustic guitar master Peppino D’Agostino has had a busy six years since his critically-acclaimed release, Penumbra, touring internationally, scoring documentary soundtracks and video games, and performing with some of the world’s best musicians. This all served as inspiration for his new, original recording, “Connexion”; the long-anticipated album will be released on April 3rd, 2020, by A-Train Entertainment. Peppino’s new musical effort contains entirely original compositions that reflect the distilled work and artistic sensitivity of a virtuoso master and composer.

“Influences are as far-flung as the flamenco work of Paco de Lucia and the pop sensibility of The Beatles, evident in the songs he’s written, which brim with memorable melodies.” – Chicago Tribune

Peppino is not only one of the top guitarists in the world, but also a charming, engaging performer who composes music that truly mesmerizes audiences. His gift for creating emotional melodies supported by beautiful harmonies is well known. His solo guitar piece, “The Blue Ocean,” for instance, has been used as a soundtrack for the Monterey Bay Aquarium’s documentary “Journey to Baja: A Tale of Three Travelers” and watched daily by thousands of visitors.

“It has been a great learning experience for me to see how Peppino plays in front of an audience. He’s very endearing to them because of the conviction and the genuineness in his musicality.” – Eric Johnson 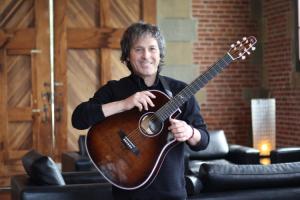 Peppino has been living in the Bay Area for over 35 years. A native of Italy, D’Agostino has made his considerable international mark as a musical artist on the guitar since he arrived in America 35 years ago. In 2017 Guitar Player listed him as one of the 50 transcendent superheroes of the acoustic guitar of all times. The CD, “Every Step of The Way,” was awarded by Acoustic Guitar’s People’s Choice Awards with a Bronze medal for Best Acoustic Album of All Time. His signature Seagull acoustic guitar has been voted among the ten best signature guitars by Guitar Player magazine.

“Not many guitarists are as unforgettable as Peppino D’Agostino.” – Lee Bell, Senior Director of Programming at the Kravis Center for the Performing Arts

Since the beginning of his career, Peppino D’Agostino has collaborated, recorded and performed with enthusiasm and passion with many incredible musicians such as Grammy Award-winning Sergio Assad, Australian guitarist Tommy Emmanuel, Jazz guitar legend Martin Taylor and electric guitar genius Stef Burns. Although Peppino continues from time to time to join forces with his amazing colleagues, his desire for his new project was to focus on the beauty, mysteries, and challenges of the solo acoustic guitar.

“Peppino D’Agostino is a guitarist’s guitarist know as much for his technical skills as for his writing, he’s one of the most capable composers among fingerstyle guitarists.” –  Acoustic Guitar Magazine.

Says Peppino, “The first tune on the album entitled ‘High Plains Guitarra’ will transport the listener to the unforgettable era of the Western movie of the 60’s and the work of the brilliant film composer Ennio Morricone. ‘Dancing with Shadows’ was inspired by the Doo Wop genre of the 40’s and the ghosts of the old ballrooms that once were in Torino, Italy. ‘Head Case’ is pure high energy improvisation inspired by the unpredictable Laws of Chaos. ‘Buster’ was written for the late great Musician and Guitarist Buster B. Jones. ‘Mara’s Sleeping Song’ is my rendition of a beautiful piece written by the fantastic Mandolin virtuoso Caterina Lichtenberg. I’m blessed to have Stef Burns doubling the beautiful melody and improvising masterfully over it. ‘Mexican Sunrises’ is about dreaming of laying beneath a beautiful sunset in Baja California, Mexico. ‘Liam’s Song’ is dedicated to little Liam, one of my best friends. Stammi Vicino was written together with the legendary Rock Star Vasco Rossi and the inimitable electric guitar genius, Stef Burns. ‘Jenny’s Goodbyes’ is dedicated to Jenny, a wonderful woman that left us too early. ‘Beauty in the Abyss’ is about dreaming of the whales, the beautiful creatures of the deep Oceans.

Peppino D’Agostino has crafted a solo guitar style that is delicate, ethereal, stunning and technically brilliant. D’Agostino says, “The challenges in composing for steel string guitar are multiple and difficult to overcome. The general tendency is to either relax into predictable and boring musical territory or to show off with useless displays of speed. As my composition instrument of choice, I’m approaching the steel-string guitar as an orchestra with infinite possibilities.”

“A poet…among the best talents around.” – San Francisco Chronicle

The pre-order for autographed CD’s starts on March 6, 2020 from Peppino’s website

This entry was posted on Monday, March 16th, 2020 at 15:27 and posted in Peppino D'Agostino, Press Release. You can follow any responses to this entry through the RSS 2.0 feed.
« Emmy Award Winning Guitarist Brian Tarquin’s “Vegas Blue” In Memory of Las Vegas Tragedy
Krautrock Legends GURU GURU Release “Live in China” New CD & DVD »