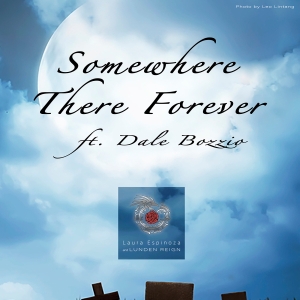 Dale Bozzio, legendary lead singer of Missing Persons, makes a special guest appearance and joins Mindy Milburn on vocals to record Laura Espinoza and Lunden Reign’s newest single, “Somewhere There Forever.” This is a quirky, eclectic song about a person who doesn’t want to let go of someone they love and miss very much, but that person is now only in their memories.

“Walking down a graveyard path near here,
Drinking in the moonshine chasing fears,
You are calling so loquacious, You are falling so impatient
Then I realize you have disappeared”

Listen to “Somewhere There Forever”:
https://soundcloud.com/lundenreign/somewhere-there-forever-ft-dale-bozzio-laura-espinoza-and-lunden-reign

“’Somewhere There Forever’ takes me back to the ’90s with No Doubt’s ‘Tragic Kingdom’ and ‘Letters to Cleo.’ This is the sound that I had hoped those bands would continue with on the radio, but that never happened. You continue to create music we wish we heard on popular radio. Great job.” – Warren Kurtz, Goldmine Music Magazine

“Somewhere There Forever” will be released world-wide on October 1, 2019 on all major music platforms including: iTunes, Apple Music, and Spotify.

This is the second single released this year by Laura Espinoza and Lunden Reign. Their song “Follow Me to the Sun” was released in April, 2019. Both will be combined into the bands upcoming third album slated for release in mid 2020. Both songs written by Laura Espinoza.

The band features Laura Espinoza – guitar; Mindy Milburn -lead vocals; Matt Denis -bass & Noel Jasso – Drums and will be performing in the fall on the Sunset Strip in Hollywood.

To purchase “Somewhere There Forever”:
iTunes:https://music.apple.com/us/artist/lunden-reign/725277210

Is this really a life without you?
An hourglass without sand

When I met you I never ever
Thought I’d see you there
Lying somewhere there forever.

Driving down the coast without a care
Speculating you are sitting there
Music blaring, people staring
Moonlight glitters, thrills we’re sharing
Then I realize you aren’t really here

Am I really just holding onto
Dreams without you here
Venerating, just speculating
You are waiting there
Waiting somewhere there forever.

Is this really a life without you?
An hourglass without sand
When I met you I never ever
Thought I’d see you there
Lying somewhere there forever

Laura Espinoza: Laura is a songwriter/guitarist, playwright, and TV producer. She is the primary songwriter for the critically acclaimed original alt rock band Laura Espinoza & Lunden Reign. Laura recently won a NARAS songwriting contest, exclusive to Grammy voting members where she participated in a private songwriting workshop with Busby, Rodney Jerkins, Shane Stevens and Sarah Hudson. She has performed on stage with Luis Maldonado (Train), Terri Nunn (Berlin), Dale Bozzio (Missing Persons) & Prescott Niles (The Knack), and started her career with Matt Sorum (Guns n’ Roses) She has recorded at Capitol Records, Hollywood, Abbey Road, UK and is the host of “The Rock Radio Show” on KBU-FM, Malibu.

This entry was posted on Friday, September 27th, 2019 at 15:15 and posted in Dale Bozzio, Laura Espinoza, Lunden Reign, Press Release. You can follow any responses to this entry through the RSS 2.0 feed.
« Modern Prog Band District 97 To Tour In Support of New Album Release “Screens”
HAWKWIND Collaborator MICHAEL MOORCOCK & THE DEEP FIX Release Third Studio Album! »