In celebration of their 50th anniversary, UK music legends Strawbs, plus a host of guest performers, former Strawbs, and Strawbs-related artists, will be performing at the Strand Theater in Lakewood, NJ on  April 26-28, 2019!

Strawbs are Britain’s most successful international progressive folk-rock band. They are mentioned in the same breath as progressive rock bands Yes, King Crimson and The Moody Blues. Strawbs have a devoted fan base that continues to grow on the strength of their incredible live performances together with their classic albums over the years including “Grave New World”, “Bursting at the Seams”, “Hero & Heroine” and “Ghosts.” The band has achieved sales of over three million albums, seven consecutive Strawbs albums have featured in the US Billboard Top 200 albums.

Many top musicians have featured in the Strawbs line up over the years, including Sonjia Kristina, Blue Weaver, Don Airey and as well as Rick Wakeman , both his classically trained sons Adam and Oliver have been featured, a certain compliment to the band’s talent. After several years of touring in both acoustic and electric lineups, in 2017 Strawbs released “The Ferryman’s Curse,” their first studio album of original material in eight years. The album returned to the album charts and garnered rave reviews worldwide!

The current Strawbs line-up comprises David Cousins, lead guitarist Dave Lambert, bass player Chas Cronk, and drummer Tony Fernandez, who recorded and toured together in the 1970s. They are joined by keyboard and guitar virtuoso Dave Bainbridge of Iona – a band who created a mystical blend of rock, folk, Celtic and ambient music – a perfect match for Strawbs. 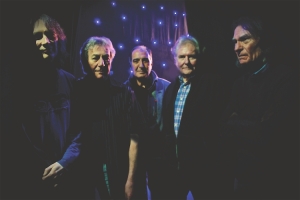 Tony Visconti – conducts Strawbs with the Terra Nova Orchestra for the first orchestral performance of “Oh How She Changed”, the band’s first single, featuring a new Tony Visconti arrangement.

Eric Bazilian – sings “What If God Was One Of Us,” the hit he wrote and produced for Joan Osborne, with Strawbs and the Terra Nova Orchestra.

Sandy Denny and the Strawbs – the classic songs recreated by Annie Haslam and Acoustic Strawbs.

VIP $300 (sold out)
All performances plus Sunday brunch with artists

This entry was posted on Thursday, February 7th, 2019 at 02:43 and posted in Press Release, The Strawbs. You can follow any responses to this entry through the RSS 2.0 feed.
« Tony Palmer & Tangerine Dream “Live At Coventry Cathedral 1975” Deluxe Box Set Now Available For Pre-order
O.R.k. Premier New Single & Video “Black Blooms” Featuring System Of A Down’s Serj Tankian »