Including a Special Date With The Renaissance Chamber Orchestra

Music legends Renaissance featuring Annie Haslam will be back in the US Northeast playing select dates in November 2018. Based on the great success in 2017 with the addition of a “10-piece Chamber Orchestra” on four of their shows, the band has been invited to once again bring this special line up to the Scottish Rite Auditorium, Collingswood, NJ. November 17th. 2018 marks the 49th year since the band’s formation and its tenth consecutive year of touring since their reactivation in 2009.

Renaissance leader and vocalist, Annie Haslam remarks, “The band keeps getting stronger and stronger and the addition of the chamber orchestra has been the most exciting development for the band in years. This addition of ‘live’ orchestral musicians adds an incredible dynamic to our big numbers like ‘Mother Russia,’ ‘Carpet Of The Sun’ and ‘Song For All Seasons,’ Day of the Dreamer, all of which included an orchestra on the original recordings.”

Ms Haslam will be joined on stage by long time musical director and associate; Rave Tesar on piano, along with Geoffrey Langley on keyboards, Mark Lambert on guitars, Frank Pagano on drums and percussion, and Leo Traversa on bass. 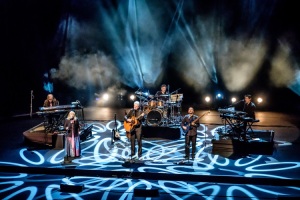 Renaissance is a band with a rich history unique unto themselves as progressive rock pioneers who rose from the ashes of the seminal UK rock band, The Yardbirds. Acclaimed for their unique blending of progressive rock with classical and symphonic influences, the band’s career has spanned forty plus years spearheaded by the 5 octave voice of Annie Haslam and the masterful songwriting skills of Michael Dunford. They are widely considered to be the band that most successfully and routinely utilized the sound of a full orchestra in their recordings.

On September 14th Renaissance will be releasing their new DVD entitled ‘A Symphonic Journey’. The DVD was filmed in October of 2017 and included for the first time the addition of The Renaissance Chamber Orchestra, a hand-picked group of 10 musicians, including strings, woodwind, brass and percussion. This is their third DVD release preceded by the 2015 ‘Live at the Union Chapel, London, England’ and the ‘Turn of the Cards/ Scheherazade and Other Stories’ 2011 release ‘Live’ at the Keswick Theatre, Glenside, PA. For this new DVD the band once again returned to the Keswick Theatre, this time employing the use of track and boom mounted cameras to create more up close and personal shots of the band and orchestra. The concert also featured large screen projections of original paintings by Annie Haslam, with corresponding titles to each song performed throughout the concert.

This entry was posted on Tuesday, September 11th, 2018 at 16:48 and posted in Press Release, Renaissance. You can follow any responses to this entry through the RSS 2.0 feed.
« King Crimson Guitar Legend Trey Gunn Presents “Intro to Modes” 8-Week Music Course – October 15 to December 8, 2018
Guitar Legend Peter Banks’s Harmony In Diversity “The Complete Recordings” Now Available! »