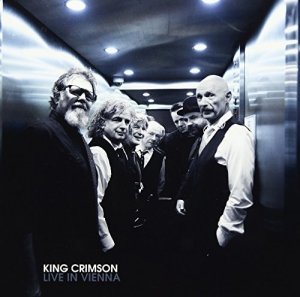 Live In Vienna, December 1st, 2016 is a new 3-disc set by King Crimson. Featuring a rendition of “Fracture,” one of the most acclaimed KC compositions and last performed live in 1974, the three-disc set will be released on April 6th and is available for pre-order now.

Mixed from the original multitracks discs one and two feature the complete first and second sets from the evening’s show. Disc three includes a series of soundscapes edited into newly sequenced pieces. Drawn from the introduction music (composed/improvised afresh for each night) & featuring Robert Fripp, Mel Collins & Tony Levin, this essential component of current live KC shows also receives its most complete presentation to date. In addition, the third disc includes the long awaited live recorded debut of “Fracture” by the 2016 line-up as performed in Copenhagen.

Disc One:
First Set: (Vienna, 2016)
1 Walk On: Soundscapes: Monk Morph Music Of The Chamber
2 Hell Hounds of Krim
3 Pictures of a City
4 Dawn Song
Suitable Grounds for The Blues
5 VROOOM
6 The Construkction of Light
7 The Court of the Crimson King
8 The Letters
9 Sailors’ Tale
10 Interlude
11 Radical Action II
12 Level V

At first glance, documenting King Crimson would appear to be fairly straightforward: record everything, document everything, issue a release from each tour or, when relevant. With the current touring band(s) that has resulted in an early, partial set from 2014 (Orpheum), a fan favourite Official Bootleg (Toronto 2015), a complete set list audio & video extravaganza with live/virtual studio listening options (Radical Action, 2016), an EP (Heroes, 2017) & the most recent (& current fan favourite), Official Bootleg (Chicago, 2017). It was always part of the plan that an official release would be taken from the 2016 European tour & the Vienna concerts were duly mixed & produced by Chris Porter, David Singleton & Robert Fripp in early/mid 2017 with a view to being released in Autumn 2017 (as happened in Japan).

But King Crimson evolves, changes, morphs as relentlessly as the Soundscapes which open each concert and, when the early half of the US tour produced the Chicago “snapshot” live tapes & with another leg to the USA tour ending for the latter half of the year, DGM opted to issue Chicago as soon as possible in Europe & the USA, temporarily postponing Vienna for a 2018 release.

Although it was a difficult decision to take, substituting a fully mixed, planned for months, release for an entirely different type of album, (Chicago was an ‘Official Bootleg’ taken directly from soundboard tapes), that decision had one further important ramification. Where the Japanese edition of Vienna had, as a bonus for local fans, live tracks from the 2015 Japanese tour, the additional time gained via the release of Chicago, allowed DGM to research & mix a live recording of “Fracture” – a key performance at a number of 2016 European shows & a piece that had not been performed since 1974 – for inclusion on the Vienna set. The recording featured is from Copenhagen in September 2016. There was also time to consider how the, often over-looked, unique to each evening Soundscape performances which open each concert, could be presented in recorded form. The result is a trio of pieces, drawn from nine separate concerts & edited ‘THRaKaTTaK’ style, featuring Robert, Mel & Tony.

King Crimson continues to re-invent & re-imagine both itself & its music; the kind of thing that once would have been called a “progressive” approach. It’s an approach that has benefited band members and listeners alike from January 1969 & continues with tours of Europe & Japan in 2018, the band’s 49th year.

This entry was posted on Sunday, February 25th, 2018 at 19:29 and posted in King Crimson, Press Release. You can follow any responses to this entry through the RSS 2.0 feed.
« Classic Rock Legends Wishbone Ash Hit the Open Road on Spring US Tour
Norwegian Art-Rock Prog Ensemble Gazpacho to Release New Studio Album Soyuz »