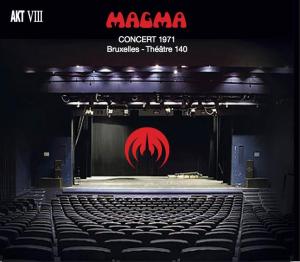 Recorded at Theater 140 in Brussels on November 12, 1971, this double CD is an exceptional document in that it represents the only record of live MAGMA of that time. Featuring the musicians on the album MAGMA 2, the training interprets topics borrowed from KOBAIA and 1001° CENTIGRADES, the first two releases by the group. The album also presents – and this is the most interesting aspect of this recording – two titles then in the making: “SOWILOI,” where Teddy LASRY demonstrates his great talent as a flutist, and “MEKANIK KOMMANDOH,” played for the first time in public, in a version much more developed than that engraved, three months earlier, on the compilation POWER 13 + 2.

This entry was posted on Monday, January 22nd, 2018 at 22:25 and posted in Magma, Press Release. You can follow any responses to this entry through the RSS 2.0 feed.
« Rick Wakeman’s The Real Lisztomania Limited Edition Box Set Now Available For Pre-Order!
Southern Rockers OTIS To Tour Europe & US In Support Of New Album “Eyes Of The Sun” »