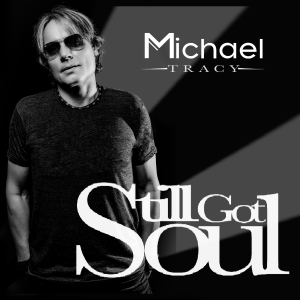 Charlotte, NC – MICHAEL TRACY combines straightforward American Rock and Roll with poignant lyrical themes, reminiscent of Rock Singer/Songwriter idols like Tom Petty, Bob Seger, John Mellencamp, and Bruce Springsteen. He has released four studio albums, and together with his band has shared the stage with Bon Jovi (garnering him a featured article in Billboard Magazine), Poison, George Thorogood, Styx, Foreigner, Don Felder, Jefferson Starship, Dokken, and Zach Myers (Shinedown). MICHAEL TRACY will release his new album STILL GOT SOUL in stores and online November 17, 2017. This latest effort is his most ambitious yet, representing an artist who has clearly found his voice and a “lane” to call his own.

His previous label experiences not being a perfect fit, MICHAEL TRACY was inspired to start his own independent label, TW Music Group, to support his new release, and set out to find the right producer that could capture the sound and style he had spent years cultivating, but had yet to realize on a record. In late 2015 Michael would find what he was looking for with Los Angeles producers Bob Marlette (Lynyrd Skynyrd, Alice Cooper) and Sahaj Ticotin (Ra). He traveled to LA and recorded three songs with them that would appear on his early-2016 release Love And Worries, a short collection of previously unreleased material. From those original sessions, a bond emerged between Michael and producer Sahaj Ticotin, and a shared belief that together they could create great records. They got together again in late 2016, co-writing an original Holiday tune that Michael had been working on called “Poinsettia Red.”

Immediately in 2017 they began plotting STILL GOT SOUL, Michael’s next full-length album. All songs on this stellar new release were written by MICHAEL TRACY and Sahaj Ticotin, and produced, recorded, and engineered by Sahaj in April and May 2017. Featuring mastering by Paul Logus of PLX Mastering and album artwork from Jason Taylor, Scott Hart, and Shannin Washburn, STILL GOT SOUL is an instant classic for every fan’s collection.

Though his time in the studio throughout 2017 kept his performances limited, Michael still booked some of his most notable shows to date. In February MICHAEL TRACY and his band opened for Bon Jovi in Greenville, SC, garnering him a featured article in Billboard Magazine. In the early spring, he played two arena shows opening for Poison, and in September was on the PNC Pavilion stage in Charlotte opening for the Jeff Foxworthy/Larry The Cable Guy Back Yard BBQ featuring Marshall Tucker Band & Foghat.

The new MICHAEL TRACY album STILL GOT SOUL will release in stores and online November 17, 2017 and he will continue to perform in support of the release throughout 2017 and 2018. For more information about MICHAEL TRACY, please visit his website and social media pages via http://www.michael-tracy.com.

MICHAEL TRACY began his journey as a singer/songwriter in early 2011, stepping on stage at a local open mic to nervously perform some songs he had just written. He had spent his early 20’s in the Navy, stationed on both coasts and traveling to countries throughout the Mediterranean. He married his wife while in the Navy and they have two children together. It was later that Michael joined together his love of words and music as a songwriter, having learned guitar as a child fascinated with books and writing. The open mic performance awakened something in him and he continued honing his chops, jumping on stages all over Charlotte and jamming with local musicians. He entered the studio in November 2011 to record his first album, Enough Small Talk.

Over the next two years, MICHAEL TRACY put a band together and impressed audiences with his high-energy and soulful performances. By 2013 he won his first of many regional awards with the reader’s choice award for Best Songwriter from Creative Loafing Best of Charlotte. He also won the Charlotte Music Awards 2013 and performed his first major opening gig as the supporting act for George Thorogood at The Fillmore. He booked more high profile gigs in 2014, including opening slots for Styx, Foreigner, Don Felder, Jefferson Starship, Dokken, and Zach Myers (Shinedown), and ended the year ended with his own headline show at The Fillmore promoted by Live Nation. While spending 2014 performing across the region, Michael also returned to the studio and produced his next album Gonna Smile, which was signed by the indie label Spectra Records and released in February 2015.

To order STILL GOT SOUL on iTunes and other services please visit http://smarturl.it/stillgotsoul

For Press and Interview inquiries, please contact Billy James of Glass Onyon PR at (828) 350-8158 or glassonyonpr@gmail.com