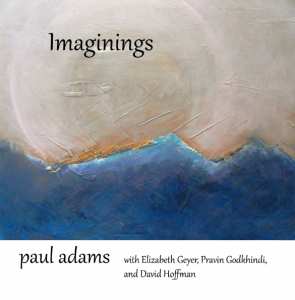 Chicago, IL – Paul Adams has never been easy to pigeonhole. But, with over 42 million streams on Pandora, there seems to be something that is getting through to the people despite lack of label affiliation. His music is widely scoped and pushes beyond the usual boundaries. Besides music and poetry, he is also a luthier and has made instruments for a number of acclaimed musicians including Daryl Hall, members of Stevie Wonder’s band and others.

“There is genre-bending, and then there is Imaginings. On the latter, the genre isn’t bent, it’s intertwined and intermixed and spun out into a glorious multi-hued comforting quilt of musical goodness. It may sound cliché but music is the universal language and Paul Adams is one of its great speakers.” – Bill Binkelman, Zone Music Reporter

In September 2015 Adams releases his tenth album IMAGININGS, a unique eclectic blend of New Age and World music with ex Ray Charles arranger/ trumpet soloist David Hoffman, bansuri player Pravin Godkhindi from India, and Australia’s Elizabeth Geyer. The album was recorded when Elizabeth was here completing her 4th album The Bridge which he was co- producing. “The goal was to focus on feeling.”. The result is completely beyond what I expected. With Paul’s collection of exotic instruments, some of which he made himself – there is a sense of cool and movement, established and rooted in a slight sense of mysticism and humor that reflects his varied musical interests.

Says Paul, “Magic was the prime vibe here. Finding Pravin on You Tube, a fascination with each other’s music, and of course having David Hoffman involved. There were just so many special moments. It felt so obvious that there was this ‘meant to be’ vibe going on throughout. Direction was secondary and improvising what came naturally was the order of the day. When Elizabeth sat at the piano and played along with my collection of exotic instruments, it was a natural blending that just worked. It was a flow. Connection. Well … magic I guess.”

In meeting Pravin, each expressed an interest in working with the other. It was somewhat of a risk as they met under circumstances that of course seem significant in this digital age. “I knew he had the chops, he was amazing. His playing was so beautiful and fluid. I sent him tracks and he recorded between his touring with his fusion band,” Paul explains. Upon receiving his contribution, it turned out to be beyond perfect with what Elizabeth and Paul had already done. “David Hoffman was invited over and given direction only of mood. This fusion of ideas and instruments from a wide variety of cultures worked miraculously. Dave added a slow essence of cool to the exotic direction of the album.” These elements of jazz (interestingly, although primarily a pianist here, in Australia Elizabeth was trained as a Jazz trumpet player), eastern and western Indian cultures, and influences from Paul’s background in Ethnomusicology lead to this incredible blend.

Says Paul, “It’s a wonderful and difficult world and I would like to think that the variety of musical cultures expressed here can metaphorically represent what is needed in the world today – a coming together of ideas and beliefs that can work together harmoniously. This was a prime life experience for me. The fact that this happened, with this result, seems no accident. There is order to the universe.”

“Imaginings” is available 9/1/15 at all digital outlets such as iTunes, Amazon, CDBaby as well as various retail outlets and of course, from Paul’s website at http://www.pauladams.org. Phone 309 688 0267

TRACKS INCLUDE:
1.Just Such Beauty
2.Giggles and Grooves
3.Imaginings
4.Panda Bears at Breakfast
5.Pastoral
6.Like Blue and Velvet
7.For Two Lovers
8.The Mysteries of Mood
9.Upon Early Rising
10.Clouds
11.Dawn
12.Conch Shell by the Sea

This entry was posted on Tuesday, September 8th, 2015 at 18:53 and posted in Paul Adams, Press Release. You can follow any responses to this entry through the RSS 2.0 feed.
« Prog Metal Band Odin’s Court Launch Crowd Sourcing Campaign to Release Two Albums
Music Legend Michael Stanley To Release New Studio Album “And Then…” »