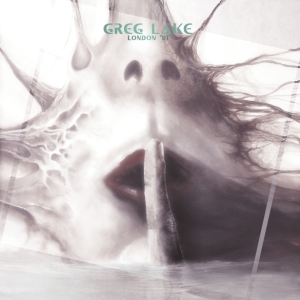 Los Angeles – Purple Pyramid Records will be releasing legendary Greg Lake’s live album from the Hammersmith Odeon in London, November 5, 1981, featuring guitar hero Gary Moore on CD & vinyl! The concert recording features ELP and King Crimson classic tracks such as “Lucky Man”, “Karn Evil 9”, “21st Century Schizoid Man” and “In The Court of The Crimson King”, as well as songs from his critically acclaimed first solo album from 1981. As a founding member of King Crimson and Emerson, Lake & Palmer, Greg Lake has been a major force in music for over 40 years. He has long been considered a legendary voice and musical powerhouse whose impact changed the landscape of rock and roll. Many simply refer to him as “The Voice”.

The Greg Lake Band made its live debut on one of the biggest stages available to it, the annual Reading Festival in England in August 1981. Much of the set was new to the audience – Greg’s first solo album would not be released for another month. But the band received a wild reception regardless, and there were enough old favorites on display to ensure the fans remained happy…including the show opener “Fanfare for the Common Man,” truly one of the most effective showstoppers ever to have opened a concert.

It was not an extravagant performance – no lasers, no levitating keyboards, no priceless Persian carpets. The myths and legends that surrounded ELP when they toured were all firmly locked away. The Greg Lake Band toured like a band, and on stage they simply took up their positions and played. Brilliantly.

That last date on the tour is where this disc was recorded, in front of 2,000 fans who now had every note of Greg’s new album memorized, and the rest of the set firmly entrenched in their DNA: the snatch of “Karn Evil 9” that eased out of the opening “Fanfare”; “Love You Too Much,” the song Lake co-wrote with Dylan in what remains another of the tantalizing collaborations of the age; “Retribution Drive” and “The Lie” from Greg Lake. “21st Century Schizoid Man” and “The Court Of The Crimson King,” from Lake’s stint with King Crimson, wrapped up the evening in positively rhapsodic fashion, and, finally, “C’est La Vie,” from ELP’s Works. (The version of this track included on the CD is taken from a show in New York City 1981)

“A single night at the tail end of a single tour, alive with promise, bristling with presence. And welcoming back some new friends, too” – Dave Thompson, writer

Tracks:
Medley: Fanfare For The Common Man / Karn Evil 9
Nuclear Attack
The Lie
Retribution Drive
Lucky Man
Parisienne Walkways
You Really Got A Hold On Me
Love You Too Much
21st Century Schizoid Man
In The Court Of The Crimson King
Bonus Track: C’est La Vie (Live in NYC 1981)

This entry was posted on Tuesday, July 21st, 2015 at 17:08 and posted in Greg Lake, Press Release. You can follow any responses to this entry through the RSS 2.0 feed.
« Audio Fidelity To Release Mahavishnu Orchestra’s “Birds Of Fire” On Limited Edition 4.0 Quad SACD
AndersonPonty Band Featuring Music Icons Jon Anderson & Jean Luc Ponty To Release New CD/DVD “Better Late Than Never” »