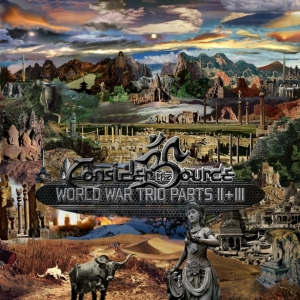 NYC – Much to the excitement of Prog fans worldwide, NYC trio Consider the Source is releasing the second installment of their epic, three part grand vision, World War Trio. Following the dense, nearly 24 minute, five part composition that comprised World War Trio (Part I), this double album begins with the trio of masterful technicians’ progressive rock, metal and jazz foundation, then draw from Middle Eastern, Indian and Eastern European traditions – balancing shifting moods and tempos, cerebral and emotional jabs and intellectual and primal pursuits – into a dynamic and cinematic audio experience that has been described by one critic as “the soundtrack to an alien invasion”. A relentless touring schedule has won the band a fervent following from California to Israel, with fans ranging from jam-band hippies and jazz cats to metal headbangers and prog aficionados.

Recorded at Bunker Studio in Brooklyn, funded by a successful Indiegogo campaign, “World War Trio” is Consider The Source’s first release in four years and their first recording with drummer/percussionist Jeff Mann, whose recent addition has supercharged the band’s chemistry. “World War Trio” spans three discs and a universe of sonic territory. Their masterful improvisation, frenetic energy, and unique blend of progressive rock and Middle Eastern music have brought them worldwide acclaim, and a rigorous global tour schedule has forged them into a fearsome live band.

“When we decided to go back into the studio, we made a pact to go all in emotionally, physically, temporally and mentally. This piece was a rite of passage for us and we are beyond excited to share it with you, our fans. We ask that when you listen to this album, please do so in an undistracted environment, preferably in headphones or high quality speakers. We have tried to capture unique emotions that cannot fully come across while listening on laptop speakers. Thank you so much. We hope you enjoy.” – CTS

Formed in 2004, Consider the Source features Gabriel Marin on fretless double-neck guitar, bassist John Ferrara, and drummer/percussionist Jeff Mann. Called “the guiding light for his generation of six-stringers”, Marin channels the mystical fury of McLaughlin and Coltrane into wailing melodies, kaleidoscopic soundscapes and boneshaking riffs. With a background in classical musics both European and Indian, and an instinct for avant-jazz and destructive metal, Marin’s hypnotic fusion of styles is ever unpredictable. Ferrara’s propulsive, percussive attack, equally suited to simple grooves and impossible chords, can ground the music or launch it into space. His madcap gumbo of slap bass, Indian rhythms, earthy minimalism and complex tapping constantly pushes into strange new worlds, whilst still dropping thick booty-clap beats. Underneath them lies Mann’s rolling thunder; dense rhythmic architecture built from pure swagger and bounce. Half double-bass prog-metal, half crackle-pop Buddy Rich swing, with African and Balkan swirls, Mann’s muscular, freewheeling polyrhythms are the engine fuel for CTS’s multiversal mischief. Even when not improvising, The trio’s music is always a conversation, a roiling stew of dynamic interplay. Each member of Consider the Source
alternately leads and follows, spars and assists; in any single song, alliances are made and broken, bargains struck and divorces finalized.

Here’s what the press have been raving about Consider The Source!

“Welcome to a new age in music. If you want a truly unbelievable, face-melting, head-banging musical experience, Consider the Source is for you.. jaw-dropping live performance that no other band can touch. ” – Headspace Magazine

“Pulling off music that is this complex is akin to walking a tightrope in high winds. Making all of it groove, move and breathe organically is an even more-daunting challenge. Rarely is music this progressive so . . . well, sexy and exotic are the words that come to mind. Music for the brain and the body, then.” – Buffalo News

“Intense jams, showcasing their diversity and pushing their instruments to the proverbial limit” – Relix Magazine

“If you’re curious as to what the kids are listening to in the Big Apple, Consider The Source may provide the answers.” – Earvolution

“They created monstrous sounds that they themselves could barely control and ate the crowd alive.” – Upstate Live

“Having seen them live, I completely understand why people are so fanatical about them. They were amazing.” – Guilt Free Pleasures

This entry was posted on Tuesday, June 16th, 2015 at 18:28 and posted in Consider The Source, Press Release. You can follow any responses to this entry through the RSS 2.0 feed.
« Guitar Legend Merrell Fankhauser Releases New Sci-Fi Symphonic Instrumental Surf Album “Signals From Malibu” on Gonzo Multimedia
Deadline Music To Release Anthology By Hard Rock Legends AXE – “Rock ‘n’ Roll Party In The Streets”! »