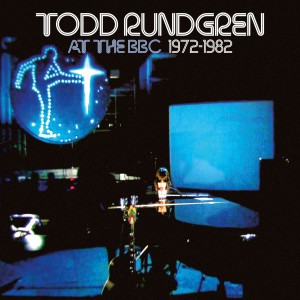 London, UK – Todd Rundgren fans rejoice! Esoteric Recordings are pleased to announce the first ever official release of TODD RUNDGREN AT THE BBC. This four-disc collection comprises three CDs and a DVD (NTSC / Region Free) featuring all of the surviving radio and television broadcasts in the BBC archive transmitted on radio and television in the UK between 1972 and 1982. The set features on CD Todd’s solo 1972 BBC Radio One “In Concert” performance, recorded soon after the release of his seminal album “Something Anything”, the classic 1975 performance by Todd Rundgren and Utopia at Hammersmith Odeon, London, (including a previously unreleased track “Something’s Coming”) – on the first ever UK concert tour of Todd Rundgren and Utopia, a 1977 performance at the Oxford Polytechnic by Todd Rundgren and Utopia (promoting the “Ra” album), and a DVD featuring three different performances for the classic “Old Grey Whistle Test” series; the 1975 Todd Rundgren and Utopia session, a film of Todd Rundgren & Utopia at the Bearsville Picnic in 1977 (performing “Singring and the Glass Guitar”) and the entire recordings made for a 1982 solo Todd Rundgren Whistle Test special (including two songs not featured on the original TV broadcast).

This set is sure to delight the legions of Todd Rundgren fans and is a superb document of Todd’s continuing development as both a solo artist and with his band Utopia between 1972 and 1982.
“Todd Rundgren at the BBC” has been remastered and authored from the original BBC masters and is presented in a clamshell box with a booklet featuring a new essay.

1. Communion with the Sun
2. Love of the Common Man
3. Sunburst Finish
4. Jealousy
5. Windows
6. Singring and the Glass Guitar
7. Utopia Theme

Recorded at Oxford Polytechnic, 25th January 1977
for BBC Radio One

To purchase Todd Rundgren At The BBC: http://www.cherryred.co.uk/shopexd.asp?id=4865

This entry was posted on Saturday, November 15th, 2014 at 20:02 and posted in Press Release, Todd Rundgren. You can follow any responses to this entry through the RSS 2.0 feed.
« Rare Recordings By Guitar Legend Peter Banks ‘The Mars Tapes’ Now Available!
BAM Magazine Review of The Adrian Belew Power Trio at The Chapel »