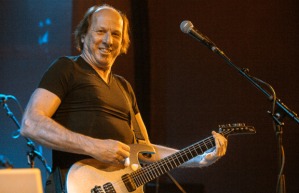 When The Chapel’s doors opened at 7pm, about 30 faithful Belew followers promptly made their way to the stage, and stayed glued there for the rest of the evening. While fans shared stories of past King Crimson and Zappa tours, an MC welcomed the crowd and pointed out that the club would be playing a wide selection of tunes from Belew’s vast career during breaks between the sets. Several hardcore devotees quickly picked out the obscure Porcupine Tree track. Tom Tom Club and David Bowie songs satisfied the rest of the anxious group.

Opener Saul Zonana took the stage, and The Chapel’s main floor reached standing room capacity. Zonana’s solo performance was limited to a tiny 4 feet by 3 feet section at stage right due to Belew’s massive display of pedals, effects, and the rest the Power Trio’s equipment. He managed to pull it off quite well.

During Zonana’s set, he spotted a fan waving a mint copy of King Crimson’s Three of a Perfect Pair, which prompted him to tell the crowd how that progressive rock record, and listening to The Beatles, convinced him to become a musician. Zonana has recorded and toured with 2000 shows under his belt, and was spotted singing harmonies (via a wireless mic) tonight in a tiny room visible from the stage when Belew was performing.

For the rest of the review, please visit the BAM Magazine website!

This entry was posted on Monday, November 17th, 2014 at 00:00 and posted in Adrian Belew, Review. You can follow any responses to this entry through the RSS 2.0 feed.
« Todd Rundgren At The BBC Four-Disc Collection Released By Esoteric Recordings
Audiophile Record Label Audio Fidelity To Produce a Series of Multichannel Releases with ETrain Records! »