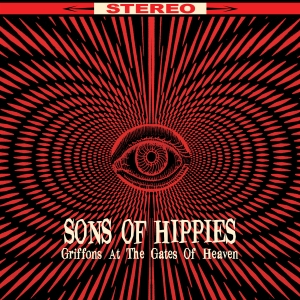 Los Angeles, CA – Florida-based Psych-Space rockers, Sons Of Hippies, take flight on the backs of mythical, winged beasts to bring you Griffons At The Gates Of Heaven, the band’s newest and most ambitious recording to date, available July 16 on Cleopatra Records. Mixed by legendary Seattle producer Jack Endino (Nirvana, L7) and mastered at Abbey Road Studios, the album fearlessly synthesizes four decades of rock with heavily echoed, neo-Surf guitar, sinister mellotron and crunching power chords. “Rose,” the album’s second single, has achieved extensive support at radio, debuting on KROQ’s “Rodney On The ROQ” program earlier this month as well as landing on CMJ’s Top 200 chart. Simultaneously, the band has been touring across the eastern states, including several special engagements with UK prog legends Nektar.

Conceived by the spiritual union of guitarist/vocalist Katherine Kelly and drummer Jonas Canales amidst the good vibes of the Bonnaroo Music Festival, Sons Of Hippies began their journey in 2008, adding bassist David Daly to the fold in 2011. Together the trio conquered the Florida music scene, earning accolades from audiences and critics alike including honors from their local alternative weekly Creative Loafing. True to their name, the band struggles to maintain the hopeful humanism of their ‘60s forebears while living in today’s alienating post-modern society. “I have always been drawn to ideas of perception versus reality,” says Katherine, “Humans live to tell stories to each other. But what happens in translation is often such a mutation of the truth that we become ideas of ourselves instead of just ourselves. I want our music to remind people to come back to themselves.”

But the band isn’t all ponderous philosophy – the first official video promoting Griffons, “Spaceship Ride,” is a musical peyote trip back to child-like innocence, while the video for “Rose” cheekily sends-up ‘70s exploitation flicks with the band themselves cast as the surprised victims of 3 blood-lusty females. As UK magazine Vive Le Rock enthused in their review of Griffons “Psychedelia just got sexy.”

Griffons At The Gates Of Heaven is available on CD, vinyl and cassette!

Order the CD on Amazon: http://www.amazon.com/Griffons-At-The-Gates-Heaven/dp/B00CQ51JXO

This entry was posted on Tuesday, July 9th, 2013 at 21:40 and posted in Press Release, Sons of Hippies. You can follow any responses to this entry through the RSS 2.0 feed.
« Legendary Singer/Songwriter Jon Anderson To Perform In The UK, Finland And Sweden, And To Be Honored In Las Vegas – August 2013
Guitar Icon Merrell Fankhauser Revisits Jimi Hendrix’s Legendary ‘Rainbow Bridge’ In New Documentary »