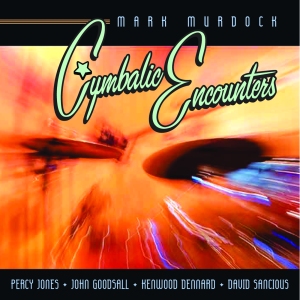 Tokyo, Japan – Prog fans worldwide are buzzing with excitement over the new CD release by drummer/songwriter/producer Mark Murdock titled ‘Cymbalic Encounters’. Says Mark, “The concept of ‘Cymbalic Encounters’ represents the ‘Encountering of Symbolic Musicians’ as my greatest success in music has been keeping company with great musicians.”

The cymbal in ‘Cymbalic’ symbolizes meeting up with another drummer. “When I was 15, I broke my snare drum head and went into a music store in Phoenix, my hometown, where I was approached by this hippie looking guy with a Liverpool accent, who inquired into the local music scene and identified himself as a drum roadie for a touring band from England and invited me to that evening’s concert to meet the drummer and band he was working for. He presented me with backstage passes and tickets.” There Mark was introduced to the drummer of the band, a guy named Phil Collins with the band Genesis. “To make a long story short, Phil was keen on American drummers and so we engaged in drummers’ talk. I instantly loved Phil’s drumming. I met him on every tour that Genesis made to the states and eventually made it over to the UK, just in time to hear Brand X in rehearsal at Islands Studios in Hammersmith, London, where I was introduced to the other members. They were preparing to record their first record. But I thought they were just jamming, so I used to jump on a percussion rig there and jam along. Not realizing what I was jamming to was the material for ‘Unorthodox Behaviour’. I also went to their very first gigs at the London School Of Economics and The Marquee Club via Phil. He also used to allow me into Trident Recording Studios where Genesis was recording ‘A Trick Of The Tail’. There might have been a hidden motive to this as I was sometimes recruited as the unpaid official Brand X ‘Fish And Chips boy’ and babysitter for Phil. But in return I used to listen to his personal tapes of the ‘Lamb’ tours and play his red upright piano with a green painting on the purple walls. It was really an ugly site!” laughs Mark. “At any rate, it made a great musical impression on my life – not the interior design, but the music, the creative element, the energy.”

“Rated as ‘8’ out of the ‘Best 10 CDs in 2012’! Mark Murdock – ‘Cymbalic Encounters’: Murdock surrounds himself with a group of outstanding players, delivering one of the best solo albums by a drummer that I have heard in a LONG time. Includes the smooth bass sounds of Percy Jones…the always in the right groove playing of John Goodsall – ‘THE CLOSEST THING’ to a new Brand X album that you’ll come close to, with a twist.” – Gary Brown, American Corespondent for Classic Rock Radio Dot EU

Mark Murdock started playing drums at a young age in Phoenix, Arizona. He played in a local jazz-rock band ‘Seacloud’ gaining local recognition and featured on Phoenix radio KDKB sponsored album. Mark’s British connections eventually led him to Peter Banks, original guitarist with YES, who he teamed up with in Peter Banks EMPIRE in Los Angeles where he showcased in Empire and recorded a demo which later was released on CD as ‘Empire Mark III’ on One Way Records. Mark was also mentioned in the Peter Banks biography (co-written by Billy James) ‘Beyond And Before’.

And just how did Mark bring Percy Jones and David Sancious together on the bonus track (song 14) “Waters From Marsh Harbour”?

Mark explains, “In terms of Percy, I have been in touch with him probably the longest out of anyone from Brand X. I moved to New York from Phoenix, only to find that Percy had moved there, as well. So, I just happened to have had the opportunity to write and record three tracks with David Sancious, who I met in Phoenix before moving east. David was touring with Jack Bruce (Cream) and Billy Cobham was their drummer, who had broken his TAMA Octobans stand. The owner of the club called me, knowing I was the only guy in Arizona who possessed one, so I hooked Billy up with my stand and got free tickets and a chance to hang with the band. I played David my recent recording that I had made with keyboardist Allan Zavod (Jean-Luc Ponty, Zappa). I assume David liked what he heard…he suggested that if I was ever on the east coast to look him up, which is exactly what I did shortly afterwards. I spent a few days at David’s house writing a three song demo which we later recorded. David’s playing is so profound! I quickly invited Percy to record bass on our tracks at Unique Studios in NYC. Brand X was actually scheduled for a 2012 tour with David Sancious, but it fell through. As a result I decided to add the track to ‘Cymbalic Encounters’ to show that they in fact joined forces below. Percy has supported me on numerous projects including ‘Eyes Down’ with songwriting, recording and playing live gigs. The ‘Eyes Down’ CD features guest appearances by violinist Shankar (Peter Gabriel, Frank Zappa, Shakti) percussionist Mino Cinelu (Miles Davis, Weather Report) and drummer/vocalist Tony ‘Thunder’ Smith (John Mclaughlin, Lou Reed) Percy is a ‘one of a kind’ bassist. He never plays inside the music, but plays outside just enough to keep within musical constraints in a mysterious way. I have always admired his musical sense.”

“I met up with John Goodsall after not seeing him since the early Brand X days in London, in 1997 in Tokyo, where I currently reside. John is amazing in the way he understands Percy’s playing and visa versus. But more than that, John’s chording, melodies and leads are like no other in my book!!! What he contributed to the tracks was so magical! I was also a big fan of Atomic Rooster which was his previous band before Brand X.”

Former Brand X/Pat Martino drummer Kenwood Dennard who played in Phil Collins absence of Brand X, due to Genesis commitments, also plays electronic drums on the track ‘Unauthorized Recording’. Says Mark, “I had this grand idea of inviting some of the previous Brand X members on board; Robin Lumley and Mike Clark, who had agreed but were swept away with overloaded projects. I later realized I actually had a track of Kenwood playing my old electronic kit at a Tokyo gig that we played together from some years back. I was able to re-trigger the drum sounds and use them on the track. It may be the first time those guys have been on record together since the Brand X ‘Livestock’ album!”

“Murdock’s ‘Cymbalic Encounter’ is a must hear CD!! Accompanied with Percy Jones, and John Goodsall they made one of the best prog – funk – jazz fusion – adult pop recordings that I heard in ages. Highly recommended!” – Gary Brown – American Corespondent for Classic Rock Radio Dot EU

Under the microscope, there are eight instrumental tracks and six vocal tracks that Mark is featured on vocals. Instrumental tracks like “Goodsall Funk Railroad/Ballad Of Percy Jones” which gets its name from Grand Funk Railroad and the kid’s animation ‘Thomas’ is very reminiscent of early Brand X with its tight funk groove and soulful guitar melodies. The track “Cymbalic Encounters” has a mellow atmosphere with John Goodsall’s signature sound. Vocal songs like ‘Artificial Society’ which has a pop element of catchy hooks to it, which Mark lyrically describes living in Japan – from a foreigner’s view point. “The Manufacturers” is a song about China’s manufacturing machine. Mark sings “We are the manufacturers – for better or for worse.” Also featured is Spock’s Beard keyboardist, Ryo Okumoto, who is no stranger to prog audiences worldwide. Ryo plays some mean MOOG synth on the track “Kaiten Zushi.” And guest guitarist, Joe Berger who offers some bluesy/soulful lead guitar on several or more tracks and also mixed and mastered the CD at BEAM AUDIO, NYC. A few of Mark’s long time friends, Dave Juteau and Ken Hall helped cover a needed few spots, which Mark is pleased with their contribution.

What does Mark have as a follow-up to this CD? “I am currently working on a follow-up CD with some of the tracks that didn’t make this CD, also batch of new songs featuring Percy and John with hopefully some new featured artists – kind of like Ringo’s All Stars Band,” laughs Mark. “Plus, I plan to release a few other side projects in 2013 as well.”

In closing Mark has this to impart to his listeners, “Percy and John really dedicated their talented writing skills and playing to support this CD. I feel honored to have them as the ‘Featured Guests’ on ‘Cymbalic Encounters’.”