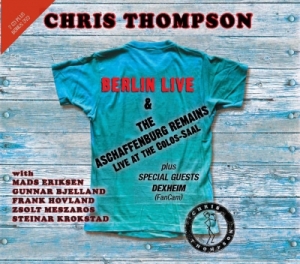 Featuring the hits “Blinded By The Light”, “Spirits In The Night”, “The Mighty Quinn” and more!!!

5/10/2012 – London, UK – You’ve heard his voice on such classic Manfred Mann’s Earthband hits as “Blinded By The Light” “Spirits In The Night”, “The Mighty Quinn” and many others, a staple of FM radio for the past 40 years, legendary vocalist Chris Thompson has released a vintage live solo concert from Berlin, Germany. Available as a 2CD and bonus DVD package, Chris Thompson ‘Live In Berlin’ features all the Manfred Mann Earthband hits you have loved for the past four decades, along with many beloved solo songs.

Chris Thompson has had a long and varied career in the music business. Born in the United Kingdom but raised in New Zealand Chris first experienced local success with bands in New Zealand before relocating to the UK in 1973. Chris’s first big break came when he replaced Mick Rogers in Manfred Mann’s Earthband. His debut with the band was on the ‘Roaring Silence’ album which contained the worldwide number 1 hit single “Blinded By The Light”. Following that single the band re recorded another Bruce Springsteen song “Spirits In The Night” which had featured on the bands previous album ‘Nightingales and Bombers’.

Whilst with Manfred Mann’s Earthband Chris also featured on Jeff Wayne’s concept album ‘War of the Worlds’ recording the track “Thunder Child” which was also a UK hit single. (Chris would regularly perform the song live in the concert presentation of the ‘War of The Worlds’ album). He also enjoyed massive worldwide success with Manfred Mann’s Earthband recording the albums ‘Watch’ and ‘Angel Station’ and hit singles “Davy’s On The Road Again”, “Mighty Quinn”, “Don’t Kill It Carol” and “You Angel You” before deciding to leave the Earthband to concentrate on his solo career by way of the band Night which Chris led for two albums.

Following his time with Night, Chris returned to the Earthband but also continued to record solo albums. More recently Chris has been performing concerts with the Mads Eriksen band where the band perform both new material from Chris alongside other songs Chris is rightly famous for from the Earthband catalogue. To date the band has filmed two live DVDs and live albums for release.

This live 2CD and bonus DVD package is a mixture of a live radio concert and a previous rehearsal and concert that took place ion Aschaffenburg. The Aschaffenburg material was salvaged from a full concert film and recording and is included as a bonus as it was felt that the material contained in the salvaged footage conveyed the excitement of the concert. The Berlin concert is just as it came from the radio transmission and as such is the complete concert as fans heard it at the concert and also on the radio

Chris is backed by a full band which includes Mads Eriksen, Gunnar Bjelland, and Frank Hovland with Szolt Meszaros on drums for the Berlin concert and Steinar Krokstad drumming on the Aschaffenburg material.

Chris Thompson’s profile as an artist is currently high due to extensive touring and also as a result of his previous work with Manfred Mann’s Earthband and also as a solo artist and as such this package will be an attractive and much anticipated release.

This entry was posted on Tuesday, May 22nd, 2012 at 00:00 and posted in Chris Thompson, Press Release. You can follow any responses to this entry through the RSS 2.0 feed.
« Blue Moon Harem’s ‘Finland’ Receives Rave Reviews
Jon Anderson To Play Select Summer 2012 Concerts »