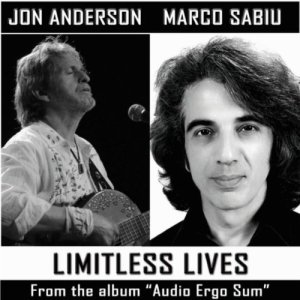 3/7/2012 – London, UK – The international music community is buzzing with excitement over the new collaboration between legendary YES vocalist/songwriter Jon Anderson and Italian composer/conductor, international producer and arranger Marco Sabiu. “Limitless Lives” is the new single co-written and performed by Anderson and Sabiu, and is now available as a digital download. The song is also available on Marco Sabiu’s most recent album ‘Audio Ergo Sum’, which was presented on February 18, 2012 on live TV before an audience of 12 million; the album has consequently reached iTunes Italy Top 10.

Music legend Jon Anderson, who has one of the most recognizable voices in music, and is best known for his work with YES, Vangelis and Kitaro, as well as his innovative solo efforts, and is currently in the midst of a successful US solo tour, had this to say about his musical collaboration with Marco Sabiu: “A good friend of mine, musician Alessandro de Rosa put Marco Sabiu and I in touch with each other just last month. I was instantly connected to Marco’s music; he sent me the music track and within moments I had sang the song and lyric and sent back to him. Marco loved my singing, so we talked about releasing the song on his new album. I love his ‘Limitless’ theme for the song, as I wrote the lyric I realized we have so much to learn in this life, and we are truly Limitless human beings”

“The collaboration with Jon was born by chance, as most of the best things often do,” says Marco. “What I found in Jon is the ideal musical partner: I’ve never met anybody who has understood my music and bettered it so quickly and effectively as Jon did. I was always very passionate about prog-rock, and being able to work with a legend like Jon is an honor, and truly exciting.” Along with being a highly respected arranger (Take That, Kylie Minogue, Pavorotti, Morricone), Marco is currently a TV star and crossover chart artist in his native Italy, as well as orchestrator and conductor for major Italian rock stars, including the arena act Ligabue. Jon Anderson and Marco Sabiu are planning to record a full album together and a tour in 2013.

Jon Anderson’s OPEN is available as a digital download and can be obtained at:
http://itunes.apple.com/us/album/open-single/id474552662?ls=1

‘Anderson / Wakeman – The Living Tree In Concert Part One’ CD on Gonzo MultiMedia can be obtained at http://www.gonzomultimedia.co.uk/product_details/15405/Anderson_-_Wakeman-Live.html

This entry was posted on Wednesday, March 7th, 2012 at 16:17 and posted in Jon Anderson, Press Release. You can follow any responses to this entry through the RSS 2.0 feed.
« Sixties Music Legend Tommy Roe To Tour In Support of New CD Release
Americana Singer/Songwriter Tokyo Rosenthal Pens Anthem For Job Loss, Outsourcing, and Desperation »