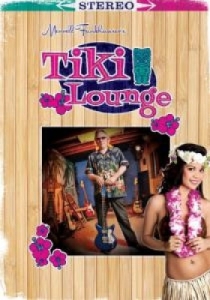 2/10/2012 – London, UK – Hailed as the godfather of surf music, legendary Merrell Fankhauser, who has led one of the most diverse and interesting careers in music, has released ‘Best Of The Tiki Lounge’ volumes 1&2 DVDs, featuring performances from his famed TV show ‘Tiki Lounge’, on UK’s Gonzo MultiMedia. Merrell Fankhauser is considered one of the main innovators of surf music and psychedelic folk rock, and is widely known as the leader of the instrumental surf group The Impacts who had the international hit “Wipeout”. His travels from Hollywood to his 15 year jungle experience on the island of Maui have been documented in numerous music books and magazines in the US and Europe. Merrell has gained legendary international status throughout the field of rock music; his credits include over 250 songs published and released.

Merrell Fankhauser has presented a number of television programs over the years including ‘California Music’, ‘Route 66 TV Live’, and in 2001 he began hosting a music show called ‘Tiki Lounge’ that airs on the California Central Coast, Southern California, Hawaii and parts of the East Coast. ‘The Best Of The Tiki Lounge’ volumes 1&2 feature highlights from Merrell’s cable TV show. Volume One features Merrell performing alongside other music artists, such as Willie Nelson, Randy California, Dick Dale and Nicky Hopkins. The DVD also includes clips from Merrell’s Birthday Boogie with Mary Ramsey of 10.000 Maniacs, Fito De La Parra of Canned Heat, Ed Cassidy of Spirit and many others! Joined once again by former Spirit drummer Ed Cassidy, along with John Cipollina, Mark Tullin and others, the ‘Best Of The Tiki Lounge’ Volume Two features new original songs by Fankhauser, including “The Whole Day Ahead of Us”. Also in this volume, Merrell takes an expedition into the Nevada desert to the edge of the secret airbase Area 51 in search of UFOs.