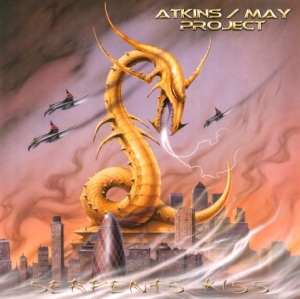 11/17/2011 – London, UK – The rock world is buzzing with proof that good and evil can in fact work together in the form of former Judas Priest vocal legend and Holy Rage heavy metal frontman Al Atkins and Christian guitarist and music artist Paul May. Together these extreme opposites combine creating a powerful new CD called ‘Serpent’s Kiss’, now available on Gonzo Multimedia. The 10-track album is the product of two of the Midlands finest architects of rock and metal coming together to create something that is unique and totally exhilarating!

There are enough doses of melody and metal madness to entice all fans of the genre, and while it is solid, honest working class heavy metal, it also has its roots in contemporary metal with some fine axe-work and killer choruses. The cover art for ‘Serpent’s Kiss’ is also unique as it was created by world famous fantasy artist Rodney Matthews.

Al Atkins: More noted for forming UK’s Judas Priest and fronting them for four years and laying down the foundations which would see them eventually selling 40 million albums worldwide. He also wrote songs for them which went gold like “Dreamer Deceiver”, “Never Satisfied”, “Winter”, “Caviar and Meths” and Priest’s all time classic “Victim of Changes”. Al’s unique powerful vocal style sites influences by noted rock singers Roger Daltrey, Paul Rodgers and longtime friend Robert Plant. Al has done countless radio and TV interviews worldwide and recently was filmed for BBC TV ‘British Heritage’ and ‘Banger Films’ Canada for the metal evolution series on VH1. He has even written a book on his musical life about growing up in Birmingham, UK alongside Robert Plant and Black Sabbath called ‘Dawn of the Metal Gods’. Al has released 6 solo albums to date, toured the US twice, and has worked with Brian Tatler (Diamond Head), Dave Holland (Judas Priest), Dennis Stratton (Iron Maiden) and Bernie Torme (Ozzy/Gillan). Al recently released a new self titled album with his offshoot band Holy Rage and has now teamed up with brilliant Christian writer/guitarist Paul May and recorded an album called ‘Serpent’s Kiss’, which Al says are the best recordings to date!

Paul May: Some people learn to play guitar, Paul was born (again) to play guitar! Paul has become respected for his passionate, soulful guitar work and noted for his explosive and exciting solos. As a world class professional guitarist and songwriter, Paul has played and recorded sessions across the globe, touring and playing throughout the UK, Europe, USA and the Eastern block. Paul appears on around 50 albums to date, featured in both the secular and Christian arenas. Paul is also a record producer and has covered the entire spectrum of musical tastes in production. Paul has played, recorded with and produced alongside the bands and members of: Al Atkins (Judas Priest), Dave Holland (Judas Priest), Roy Wood (Move, ELO, Wizard), Jon Brooks (The Charlatans), Smokin Roadie/Tempest, MC5, V-Rats, Janus, A.N.D, Dave Rowley Band, Larry Norman and many others. Along with working with Al Atkins, Paul currently plays guitar with A.N.D and Temple Dogs.

“Working with Paul May on the ‘Serpent’s Kiss’ album was a fantastic journey,” says Al. “From the opening song ‘The Shallowing’ to the last song ‘Theatre of Fools’, it was an honor to have been asked by the brilliant guitarist Paul May to put this project together… Without a doubt this is one of the best albums I have appeared on since my early days with Judas Priest and that says something having written and recorded several of my own works.”

“This album was meant to be,” explains Paul. “When Al agreed to do the vocals it inspired me to write specific tracks tailored for his voice. Not only did Al deliver in abundance, he did so with world class! It’s what I’d call a ‘Classic Hard Rock/Metal’ album; that covers a wealth of subject matters and life experiences. It’s all rock ‘n’ roll! And a real triumph to me in so many ways. I just feel blessed! To again, be involved with such a great vocalist and friend and end up with such a cracking album is a gift indeed – rock on!”

This entry was posted on Thursday, November 17th, 2011 at 19:00 and posted in Atkins / May Project, Press Release. You can follow any responses to this entry through the RSS 2.0 feed.
« Jon Anderson still says Yes to touring
Roine Stolt (The Flower Kings, Transatlantic) explains his passion & influences. »