Cult British band The Pretty Things have announced their new album “Bare As Bone, Bright As Blood” will be released on 25th September via Madfish Music. Please see below for a comment from the band’s management and the full album press release.

On May the 15th 2020, Phil May, the lead singer with “The Pretty Things” died…. Despite his well-documented ill-health, his death was unexpected and resulted from a tragic accident and not his embedded health condition. His is a catastrophic loss and has been felt and acknowledged across the world of music and the arts.

At the time of his death, he was hugely excited and enthused about the impending release of the first-ever, all-acoustic “Pretty Things” album, which had been completed before his death.

I wrote the press release below, on the 5th May, just nine days before he died. We have left it unchanged – it remains as relevant to the record – and particularly to Phil and his connection to it, as it was while he was still alive and looking forward to performing these dark songs live and walking a new tightrope of performance…..

They will now never be heard live with Phil’s voice, and maybe never at all, but that does not diminish this remarkable record which will stand as a final tribute to one of the most significant artists of his generation, and beyond.

THE PRETTY THINGS – “BARE AS BONE, BRIGHT AS BLOOD” – THE NEW ALBUM.

On December 13th, 2018, following a sold-out show at London’s O2 Indigo, The Pretty Things retired from live, electric performances, after 55 years of touring and recording, due to the ill-health of lead singer, Phil May.

This was not something that the band, or their fans, wanted, but it was unavoidable, given the circumstances. At the time, there was already a new, electric album well underway, but this was shelved as it was clear that the band would never be able to perform any of these recordings. At the time of the retirement, some sort of return, possibly in a stripped-down, acoustic format was not entirely discounted, but it was not expected, due to the health issues, surrounding Phil May and also to the general lack of appetite that the bands’ two principals – Phil May and Dick Taylor – had always shown for acoustic performance as a mainstay for their work.

However, during 2019 there was a significant sea change in attitude within the band and, early in the year, the band, together with manager and producer, Mark St. John, returned to the studio and took the first, tentative steps toward the making of a new album, this time in an entirely acoustic format. The album – now completed and entitled “Bare As Bone, Bright As Blood” – is a genuine first for a band that has been knocking down the walls with their aggressive and memorable, electric live performances for more than 55 years.

This record has little in common with their past work, save that, like so many “Pretty Things” records and projects, it is wholly unique and an absolute first. Arguably, this record is as ground-breaking as the band’s seminal Rock Opera and psychedelic masterpiece – “S. F. Sorrow” – which is acknowledged as rock music’s first Rock Opera. The levels of inspiration, imagination, originality and musicality displayed are at an equivalent high; in many ways, perhaps, because the whole record is a totally exposed, stripped down, acoustic project, principally featuring only the two band members. For them, this was an arduous and unfamiliar task, relying solely on their fundamental talents and undertaken without the support, comfort and benefit of the thundering band that had underpinned their work for so many years.

This is work stripped bare and reflects the frailties and insecurities of gathering age, ill health, painful failure and memorable success. It is a reflection on two long, long lives in art and music that have always been at the cutting edge, and that have always worked as they did at the very start, in their teenage years. “Bare As Bone, Bright As Blood” does not allow for that luxury. This is not a pair of old rockers, still the oldest swingers in town. This is the work of two, old men, who are acting their age, maybe for the first time ever. If their health and energy is depleted, their skill, insight and experience is not, with the result that they have made a remarkable, exciting, unexpected and thought-provoking record, that is, against all the odds, another singular “first” for The Pretty Things.

It was a very sad day when we said an enforced goodbye to the astounding electric band that was The Pretty Things in December 2018. It is a very happy day to see them back, finally as the old men they truly are, and finally comfortable to release the young men that, for such a long, long time, they were. “Bare as Bone, Bright as Blood” – the remarkable and unexpected new album by The Pretty Things, still the tainted, dark royalty, banished from the rock establishment.

“Bare As Bone, Bright As Blood” will be released on CD, gatefold 2xLP on red vinyl and digitally and is available to pre-order now. (https://theprettythings.lnk.to/BareAsBoldBrightAsBlood)

The first singles to be taken from the new album are the double A-side of “The Devil Had A Hold On Me” & “To Build A Wall” and are available to stream now. (https://open.spotify.com/album/57gCumw0Pj2ih9ALzfa8Sc?si=2hoAw1IeTsShEG0BpMoIAw) 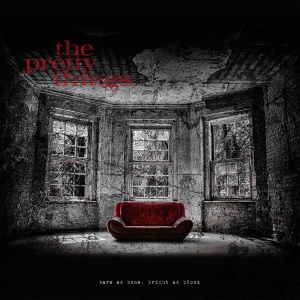 “The man David Bowie listed as God in his address book stuck two fingers up at rules about music, sex and life itself – and made the most glorious noise doing it” – The Guardian

“May’s yowling vocals were as ferociously potent as anything recorded during the 1960s British beat boom.” – The Times

“Although the Pretty Things did not achieve the fame of many of their peers in the UK rock scene, they were beloved by musicians, including Aerosmith and, most famously, David Bowie” – Pitchfork

This entry was posted on Tuesday, July 28th, 2020 at 16:08 and posted in Press Release, The Pretty Things. You can follow any responses to this entry through the RSS 2.0 feed.
« Rick Wakeman Releases New Digital Single “ASCRAEUS MONS” From His New Album ‘The Red Planet’
JETHRO TULL’s IAN ANDERSON Joins TERRY REID And MANCHESTER STRING QUARTET On An Epic New Version Of BADFINGER’s “DAY AFTER DAY!” »