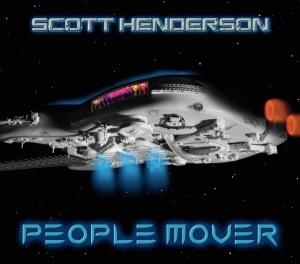 Los Angeles, CA – Guitar virtuoso Scott Henderson has finished his new album “People Mover,” the most ambitious project of his career! The highly anticipated instrumental album for guitar trio will be released on July 1, 2019.

Says Scott, “The music has a lot of interplay due to a busy touring schedule with bassist Romain Labaye and drummer Archibald Ligonniere. I’d say this album is a bit more harmonic than ‘Vibe Station,’ and the rhythm section plays a bigger role in the music. The challenge was to come up with new tones and effects I haven’t used before, since like ‘Vibe Station,’ the songs are layered with multi guitar tracks.”

“People Mover” demonstrates Scott’s striking ability to combine elements of jazz, rock, funk and blues in an even more authentic, seamless and musical way than any of his previous work. Proof that after 35 years as a bandleader, Scott is a musician who’s playing and composing continues to grow.

From a recent interview, “My music isn’t for purists, that’s for sure, and I’m very thankful for my fans who are obviously open-minded and share my love for many different styles of music.”

Scott Henderson’s impressive work over the years as co-leader of the group TRIBAL TECH, leader of his own ground breaking trio, and sideman to some of the best jazz artists of their generation, including the great Joe Zawinul, has elevated him to the front ranks of both Jazz and Blues. Catch Scott on tour in 2019: July in Europe, September in South America, and October in Asia.

This entry was posted on Wednesday, June 19th, 2019 at 16:26 and posted in Press Release, Scott Henderson. You can follow any responses to this entry through the RSS 2.0 feed.
« Phenomena’s ‘Anthology’ Features the Best and the Rarest Tracks From the Original Trilogy – Out Now!
Martin Barre Drummer Dave Schoepke To Release Innovative Solo Drum Album “Drums On Low” »