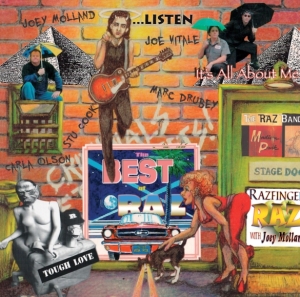 “I met the Raz almost 40 years ago and he’s been knocking me out ever since. The truth is in the songs, I don’t think he ever had an idea outside of that idea, so I started playing on his sessions like a lot of other people, we’ve done gigs separate and together for all those years and here we are with our first record deal, thanks Gonzo, hello world, will anything ever be the same? Sure it will, ‘cept you’ll have The RAZ Band to make sure”. – Joey Molland

“Raz came to some of the Joe Walsh shows and my solo shows I did as far back as the early 70’s…we’ve been friends ever since…both personally and musically! We’ve recorded a ton of GREAT Raz originals and yes… miracles can happen…in this century… A RECORD DEAL! Well, being a couple of devoted Beatles fans, we have a similar sense of ‘song’… the RAZ catalogue is massive, current and rockin’! They are ALL fun grooves and great lyrics!!! It’s GREAT to introduce The RAZ Band to the world!” – Joe Vitale

Tracks:
The Boy
Say Ya Love Me
Time Marches On
Back in the Shadows
Merlyn
Down at the Gulf
Simon Said
The Tattoo Song
Tough Love
Buck-it
Naked on the Floor
Sitting on my Bed
I Said To My Self: Self
Cars and Girls
$ 1.50 For Your Love
What Love Can Do
Searching Forever
The Times Together
The Boy

Here’s what the press have been saying about The RAZ Band’s “Madison Park”:

“Excellent Authentic Mind-Blowing Rock and Roll! ‘What Love Can Do’ goes on boiling electric guitars, and heck you’d think it’s an introduction by Guns n Roses. ‘Say Ya Love Me’ is one of my preferred, with ROXY Music background in it’s infancy, but having taken a ROXY vitamin. Even the punk is present with the disorienting ‘You Don’t Know A Thing’, The Ramones could not have done better, everything is completed at supersonic speed. A great rock band in 2016, it still exists moving you like an electro shock.” – Jean-Pierre Schrickle, Highlands Magazine

“For the first time in years an album makes me feel so impressed that I need to listen to the songs several times in sequence, and I do not get tired of doing it. Madison Park is for me the best album of the year 2015.” – Airton Diniz Editor, Roadie Crew Magazine

“ ‘Madison Park’ is a phenomenal album from start to finish and one in which the Raz Band shines in terms of performance and originality. You have been hijacked to pop heaven.” – Lisa Torem, PennyBlack Music

“The band is good, and the album is packed with power pop and, rock & roll. This gets 5 out of 5 Music Guru Stars. Enjoy!” – Music Guru Radio

“Three decades on the scene haven’t diminished this ensemble’s ability to build a robust kind of rock ‘n’ roll, with vigor and simplicity unburdened by extra exquisiteness but not without an arresting flourish. There’s no escaping the music’s mirth. Anything can happen, including a charts dent – it’s that good.” – Dmitry M. Epstein, Let It Rock

“ ‘Madison Park’ is an excellent new work, catch this band. There is more than enough variety in the songs and the whole production was realized by the special contribution of Joey Molland and Joe Vitale.” – Alfons Maes, Keys & Chords

“ ‘Madison Park’ is a beautifully produced collection of rock from The Raz Band. Good time from start to finish ,the album is a fun packed selection of tunes that keeps you singing along and grooving around the house.” – Terrascope UK

“ ‘Madison Park’ is an album with songs that make you feel good.” – Eric Schuurmans, Roots Time

“This is the kind of stuff you see in a club live that finds you not minding paying the babysitting some over time. Hot stuff throughout.” – midwestrecord.com

“True songs of rock ‘n’ roll, with attitude,feeling and melody. The Raz Band are indeed in great form and sign a beautiful drive.” – Pedro Carvalho, Via Noctuma

“The melodiousness always offered in the songs run at almost every opportunity and let yourself entertained. Play therefore recommended , because this disc from The Raz band has to offer many strengths.” – Markus Kerren, Rock Times (*me•lo•di•ous adj. 1. Of, relating to, or containing a pleasing succession of sounds; tuneful.)

“The rock sound is deeply rooted in the 1960s and ’70s. In addition, the pop component is heavily weighted. THE RAZ BAND satisfied in all respects with platitudes and simple rock-pop fare that is still sorely inspired by the Fab Four.” – http://www.music-scan

“The RAZ Band have been performing for over thirty years and have included some of classic rock’s elite as it’s members.” – JPS Music Blogspot

This entry was posted on Tuesday, May 10th, 2016 at 19:23 and posted in Press Release, The RAZ Band. You can follow any responses to this entry through the RSS 2.0 feed.
« Unreleased 1981 Live Gem From Ritchie Blackmore’s Rainbow Will Finally See The Light Of Day!
Hawkwind Alum NIK TURNER Brings His Spacey Sax & Freaky Flute Playing To A New Album By Experimental Jazz Fusion Ensemble FLAME TREE! »