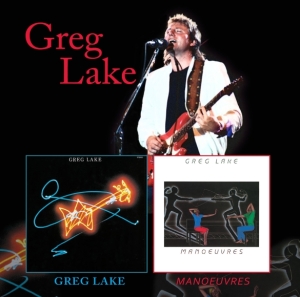 London, UK – Greg Lake is the co-founder of KING CRIMSON and EMERSON LAKE AND PALMER (ELP), and wrote the hit “LUCKY MAN” and co-wrote “I BELIEVE IN FATHER CHRISTMAS”.

This 2-CD set collects together both of Lake’s two solo albums, his first self-titled album (1981) and his second album “Manoeuvres” (1983). The set includes FOUR BONUS TRACKS which have never been included on any re-issue of the albums, only on separate rarities albums.

The first album and its three bonus tracks feature all of the members of TOTO with the exception of Bobby Kimball as Lake handles all lead vocals. Both albums also feature appearances GARY MOORE on guitar.

Both CDs have received a 2015 REMASTER which has the personal approval of GREG LAKE. The booklet includes extensive liner notes. This is a great and easy way to buy both of Greg Lake’s studio albums and all the rarities connected to these albums in one place.

In other news, on January 9th Greg received an honourary degree from the Conservatorio Nicolini in Piacenza, Italy! This was the very first honourary degree for music the prestigious university has ever awarded!

This entry was posted on Friday, January 15th, 2016 at 20:16 and posted in Greg Lake. You can follow any responses to this entry through the RSS 2.0 feed.
« Rock Legends Lucifer’s Friend Release LIVE @ SWEDEN ROCK 2015 – OUT NOW!
Blues Hall of Fame Singer Sari Schorr Recording New Album With Legendary Producer Mike Vernon and Performing Selected US Dates »