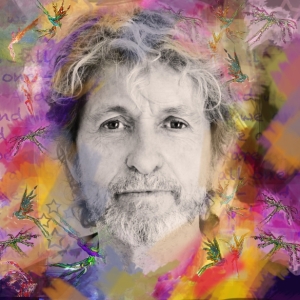 The Prog Interview is just that: every month, we’re going to get inside the minds of some of the biggest names in music – and they don’t come much bigger than Jon Anderson.
The former Yes man reveals all about his upcoming album with Jean-Luc Ponty, tells us what he thinks of Yes today, and shares his thoughts on everything from Sibelius to strippers and spiritualism.

Tomorrow morning, and probably every morning when he’s not on tour, Jon Anderson will have breakfast in bed with his wife, Jane, at their house in the old Spanish mission town of San Luis Obispo, California. “And then we sit for a while and watch the birds, the deer and the rabbits outside the house,” he says.

Anderson’s sing-song voice is so familiar from those old Yes albums that when you ask where he lives in relation to Los Angeles, you half expect him to answer, ‘Close to the edge, down by the river…’ (In fact, it’s a three and-a‑half-hour drive north of LA.)

It’s not a bad life, then, for the 70-year-old, Lancashire-born singer-songwriter and exiled Yes vocalist. However, there have been some not-so-good days. In 2008, Anderson suffered acute respiratory failure, which required months of recuperation and cost him his place in Yes, who continue to tour and record without him.

Today he brushes off a question about his health (“It’s good – I’m good”), preferring to look forward to his latest project, a collaboration with ex-Mahavishnu Orchestra violinist Jean-Luc Ponty.

But over the course of the conversation, Anderson ends up looking forwards, backwards, sideways, upside and down. Dig a little deeper, though, and this spiritually minded astral traveller isn’t so far removed from the teenager who started his musical career as a singing milkman in Accrington.

First, though, there’s Progeny – a just-released 14-disc boxed set that contains seven Yes shows from 1972 – to dissect. Or perhaps not…

Chris is going through it. It’s a tough one. I pray for him every day – I’m sending out that love energy.

Have you made it through all of Progeny yet?

No [laughing], because I haven’t had my copy yet! There’s a lifetime’s worth of music there. I still remember that time vividly. Yes were on cloud nine and we stayed that way for about a decade.

That’s classic Yes. If I think back to those shows, the band was in harmony, musically and mentally.

Have you spoken to Chris Squire since he was diagnosed with leukaemia?

I emailed him after I heard he got sick. Chris is a musical brother, regardless of anything else that’s gone on. I wouldn’t be where I was if it wasn’t for him. I was with Yes for 35 years – that’s half a lifetime. You don’t just forget that. But Chris is going through it. It’s a tough one. I pray for him every day – I’m sending out that love energy.

What stage is the Anderson Ponty Band album at now?

We’ve just finished it, and the DVD, and they’ll be out in September. We’re hoping to tour the UK in October. It’ll be me with Jean-Luc and his band. They’re formidable musicians and they don’t mess around.

How did this collaboration with Jean-Luc come about?

I found a couple of Jean-Luc’s songs from the 70s on his website and sent him one of his tracks with me singing on it. I said, “If we worked together, this is what it would sound like.” He liked it and we carried on from there. We went to Aspen [Colorado] for two and a half weeks and did a show, which became the basis for the album.

What material will you be playing?

It’s a mix. We do some Yes songs – Roundabout, And You And I and Owner Of A Lonely Heart. The band wanted to play Owner… and it sounds very cool with a violin. They play the hell out of it.

Let’s go back. Do you remember the first gig you ever played?

It was with my brother Tony’s group, The Warriors, and it was in Padiham’s Working Men’s Club [in Burnley, Lancashire, circa 1963]. We came on after the bingo but just before the stripper. I was a young lad – 17, maybe – and it freaked me out when this woman walked past us naked. It was enough to put you off sex forever…

No, she was frightening!

One of your early jobs was as a milkman.

For the rest of the interview, please visit the PROG website!