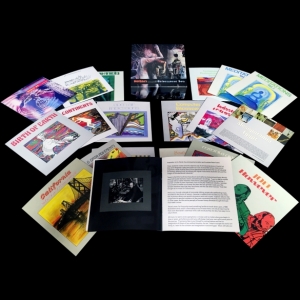 Los Angeles, CA – At long last, the first ever CD release of Brainticket founder Joel Vandroogenbroeck’s much sought after Coloursound recordings presented in a limited edition, sequentially numbered 18CD box set! These rare recordings were released anonymously throughout the ‘70s and early ‘80s on the German-based Coloursound label, which specialized in ambient soundscapes for use in film and television, and have gone largely unheard except by those who know them to be some of the most progressive, awe-inspiring masterpieces Joel VDB ever committed to tape! The Coloursound Box also features meticulously recreated artwork from the original Coloursound LPs plus personal reflections on each album by Joel himself alongside additional liner notes by music historian Dave Thompson! The entire package is available now courtesy of Purple Pyramid Records.

Belgian-born Joel Vandroogenbroeck was playing jazz in Switzerland when he found inspiration in the new sounds emanating from German krautrock artists Amon Duul II, Can, and Tangerine Dream. Under the influence of these groups, Joel and guitarist Ron Byer recruited drummer Wolfgang Paap and formed the trio that would become Brainticket. The group’s 1971 debut album Cottonwoodhill immediately ran into a storm of controversy for its association with psychedelic drugs. The album came with a warning label that insisted you should “only listen once a day to this record. Your brain might be destroyed,” which led to the album being banned in several countries including the USA.

From then on, Brainticket’s reputation as a band of experimentalists at the forefront of underground, avant-garde music had been solidified. Following the death of Bryer, Brainticket regrouped for 1972’s Psychonaut followed by Celestial Ocean, which told the after-life experience of Egyptian kings traveling through space and time. Released in 1973, the album was hailed as the definitive Brainticket experience and earned the band their greatest acclaim. And Joel has continued to explore new creative avenues over the decades, releasing more albums under the Brainticket moniker, including his most recent offering Past, Present & Future, which was released in February of this year by Purple Pyramids. The Coloursound Box is sure to please fans of Brainticket as well as fans of adventurous, avant-garde music!

This entry was posted on Saturday, June 13th, 2015 at 03:21 and posted in Brainticket, Joel Vandroogenbroeck, Press Release. You can follow any responses to this entry through the RSS 2.0 feed.
« UK Prog Icons Landmarq To Release “RoadSkill – Live in the Netherlands” Special Edition CD/DVD
Guitar Legend Merrell Fankhauser Releases New Sci-Fi Symphonic Instrumental Surf Album “Signals From Malibu” on Gonzo Multimedia »