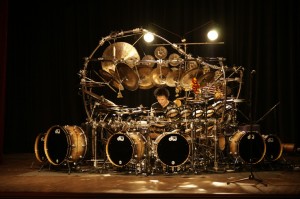 Terry Bozzio — one of rock drumming’s most formidable and brain-circuiting forces — is currently touring America, playing solo dates on “the world’s largest tuned drum and percussion set.” Best known as the hurricane behind Frank Zappa’s late-Seventies and early-Eighties work, and the hit-maker behind new wave powerhouse Missing Persons, Bozzio, 63, is hoping to shed his reputation as technical solo shredder. Following successful tours in Europe and Japan, “An Evening With Terry Bozzio,” is the first time he’s touring a melodic solo percussion performance in North America — hitting 40 dates, playing on two-and-a-half octaves of tuned tom-toms and eight notes of bass drum. We caught up with him to ask the drumming legend exactly how he’s lugging this thing across America.

How are you doing?
Man, I’m in hell right now!

Do tell…
I’m on my way to San Diego for the first gig of the big tour here and we snapped a serpentine belt in my SUV, so we’re trying to find a garage to fix it in and make the gig on time.

So, wait, are you doing this tour in your own SUV?
Yeah, I always do that. We tow a trailer with my drums — it’s me, my wife, and my tech — and that’s how we do it.

So this is your first solo tour of America doing this?
Yeah. Essentially for me, personally, it’s like doing same thing, different day; it’s just packaging. My problem’s always been how to market myself, so now I have a booking agent and a press guy who’s come to bat for me and they believes in me. The idea of a solo drummer is a difficult thing to get across to people. They think of the thrashing and bashing of a typical rock-concert drum solo. And what I do is not that [laughs]. So, basically, I’ve been doing the same type of playing under the guise of a drum and cymbal commercial for 25 years — maybe 30 years now — for Sabian or Drum Workshop drums. And what I’m doing now is taking it to a more public level.

It certainly got our attention more than a drum clinic would…
So, what I do, is my drums are tuned to chromatic and diatonic pitches and I have, I guess, I have two and a half, three octaves or so of notes to play on the toms. And then I have the eight different white notes of the piano as my bass drums. So I’m able to accompany myself much the same way a pianist would — with his left hand playing the bass notes and the right hand soloing against it. And that’s how I approach the drum-set. It’s very melodic, it’s compositional — it’s also improvisational — but I improvise in a compositional matter, it’s not just patterns and shredding and crap that you go, “Man, this guy does that perfectly. If on only if it meant something, you know?” L.A., it seems, has a glut of those kind of players that are just really enviable in their technique but don’t really say much, or maybe they don’t want to something that would make a producer not hire them for a session. So, for myself, it’s a pretty much a complete musical statement on the drums, and it doesn’t lose the primitive and the bashing and that fiery rock stuff that happens on the drum set. Otherwise, I’d just be a pianist or a marimba player.

It’s kind of a neat thing that it’s happened this year in the States because this is the 50th anniversary of my first drum lesson. It’s kind of neat how life and fate all work together, and here I am sitting in a broken car, sweating, hoping I’ll make the first gig. [laughs]

For the rest of the interview, please visit the Rolling Stone website!

This entry was posted on Friday, August 29th, 2014 at 00:00 and posted in Interview, Terry Bozzio. You can follow any responses to this entry through the RSS 2.0 feed.
« Virgil Guitars Makes Unprecedented Leap On Kickstarter
UK Punk Legends The Vibrators Get Back To Their Roots With Their Newest Album Punk Mania! »